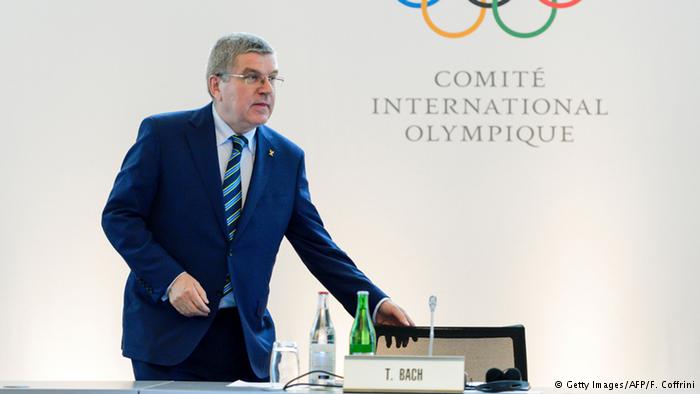 After the decision not to impose a general ban on Russian athletes from competing at the Olympics in Brazil, IOC President Thomas Bach has faced widespread criticism. In Russia, though, the news was greeted with relief.
Most of the sporting world has voiced disappointment following the IOC’s decision not to impose a blanket ban that would have prevented all Russian athletes from competing at this summer’s Olympic Games in Brazil.

IOC President Thomas Bach has been the target of much of the criticism over Sunday’s decision, which came just days after the release of a WADA-commissioned report, which accused Russia of covering up doping in 20 summer Olympic sports.

Bach argued that an outright ban would have violated the rights of clean Russian athletes hoping to compete at the upcoming Games.

Individual sports federations will now have primary responsibility for determining every Russian athlete’s eligibility for Rio, the IOC president said.

Among the sharpest critics of the decision was the chairperson of the German parliament’s standing committee on sports, Dagmar Freitag.

“The IOC has spoken out against a clear recommendation by the World Anti-Doping Agency WADA. This sends the worst possible signal with in terms of a credible battle against doping,” Freitag told the SID news agency.

US anti-doping chief Travis Tygart also criticized the IOC over the move, accusing it of creating “a confusing mess” with its decision.

“In response to the most important moment for clean athletes and the integrity of the Olympic Games, the IOC has refused to take decisive leadership,” the USADA boss said in a statement.

The Australian government warned that a “suspicion of compromised integrity” now hung over the Games and New Zealand’s anti-doping body lamented “a black day for clean athletes”.

However, the IOC president did receive a vote of support from the man who succeeded him as the head of the Germany Olympic Sports Confederation, Alfons Hörmann.

“Thomas Bach managed all of this professionally and in a balanced and holistic manner, as one must do at the top of international sports,” Hörmann said.

Russia, on the other hand, expressed relief at the decision, which will allow Russian athletes who are deemed to be clean to take part in the Games in Rio de Janeiro.

“The athletes will depart on Thursday,” Russian Olympic Committee president Alexander Zhukov announced on Monday. Bach was under considerable pressure in recent weeks to ban Russia, “but he has resisted,” Zhukov added.

Russia’s Sport Minister Vitaly Mutko called the criteria in which Russian athletes must prove themselves clean “extremely hard,” but said he was still confident that “the majority of the Russian athletes will go to Rio.”

Australian mining magnate to donate chunk of his fortune