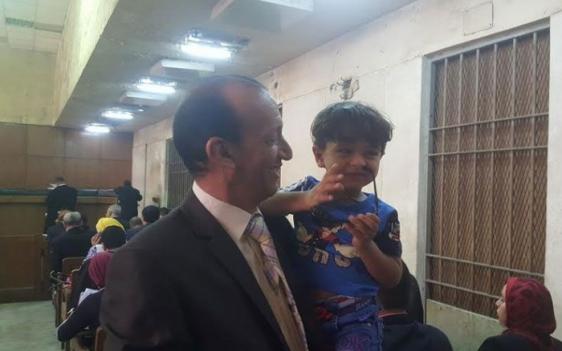 The Nasr City Misdemeanour Court acquitted on Monday a three-year-old child from charges of robbery, resisting arrest, and terrorising citizens in three out of four cases. He was sentenced to three years in prison in absentia over the aforementioned charges.

Zeyad Hassan Qenawi was banned from travelling to Saudi Arabia with his father earlier in June after officers at Cairo International airport informed his father that Zeyad is a “wanted criminal” over charges of resisting arrest and robbery.

“I was stunned when Zeyad’s father called me and explained the details of the incident. To me, as a lawyer, it was a peculiar case. I tried to calm him down and convinced him to postpone his trip,” Zeyad’s lawyer Mahmoud Al-Shenawy told Daily News Egypt on Tuesday.

His father had not been informed about the lawsuits by the prosecution, and the judiciary issued the sentences in absentia, Al-Shenawy clarified.

Subsequently, the child’s lawyer filed an appeal against the issued verdicts to suspend their execution.

Al-Shenawy noted that throughout several court sessions in June and July he succeeded in acquitting Zeyad from three out of four cases.

After Al-Shenawy conducted further research, he discovered that Zeyad’s father—a real estate contractor—had bought a truck and registered it in his child’s name.

“A police officer plotted against Zeyad’s father due to an old dispute. The officer had filed a report that the aforementioned truck had engaged in smuggling coal, driving quickly, and did not comply to an arrest warrant,” Al-Shenawy explained.

The prosecution referred the case to trial, accusing the official owner of the truck, who was Zeyad according to the Traffic Authority’s paperwork. The court issued the verdicts in absentia.

Nasr City Court had asked for an accurate inquiry into the actual owner of the truck. The child was acquitted after it was proven that Zeyad’s father was the real owner.

“It was a different experience. The scene in court was ridiculous. Bystanders in the court could not believe that a lawyer was carrying his defendant in front of the judge,” lawyer Al-Shenawy mocked.

Backlash following the engagement of minors in Daqahleya