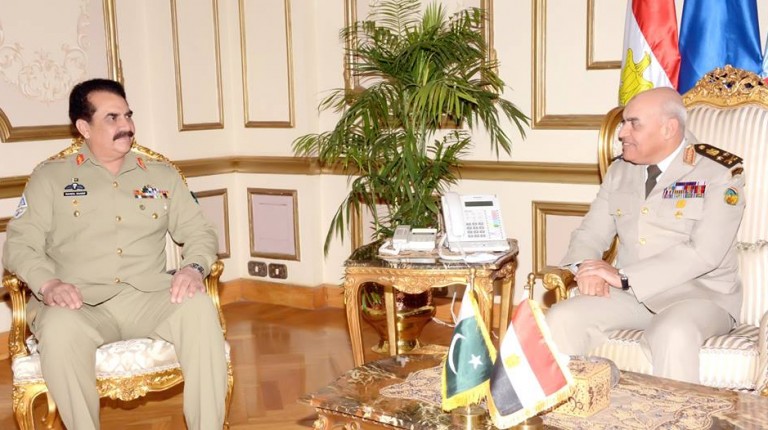 President Abdel Fattah Al-Sisi met with Pakistani ground forces chief of staff Raheel Sharif and the Pakistani prime minister Nawaz Sharif on Tuesday, according to a statement released by the presidency.

Sharif is currently leading a military delegation in a two-day visit to Cairo.

During the meeting, Al-Sisi highlighted the importance of merging forces and sharing expertise in the fight against terrorism through a comprehensive strategy.

Both officials acknowledged the diplomatic ties between both countries and their hopes of increasing military cooperation, security developments, and challenges in the region.

According to the Pakistani army spokesperson, Egyptian leaders expressed their willingness to learn from Pakistan about dealing with terrorism and the elimination of landmines.

In March 2015, Pakistan and Egypt joined the Saudi Arabia-led military coalition against Houthi militants in Yemen with air and naval forces. Both countries had also expressed their readiness to contribute ground troops to the campaign.

Both Egypt and Pakistan are also part of the Saudi Arabia-formed Islamic Military Alliance, along with at least 30 other Muslim countries. Through this alliance, countries are expected to work together to target terrorist organisations, not just Islamic State, in all countries, including Iraq, Syria, Libya, Egypt, and Afghanistan.