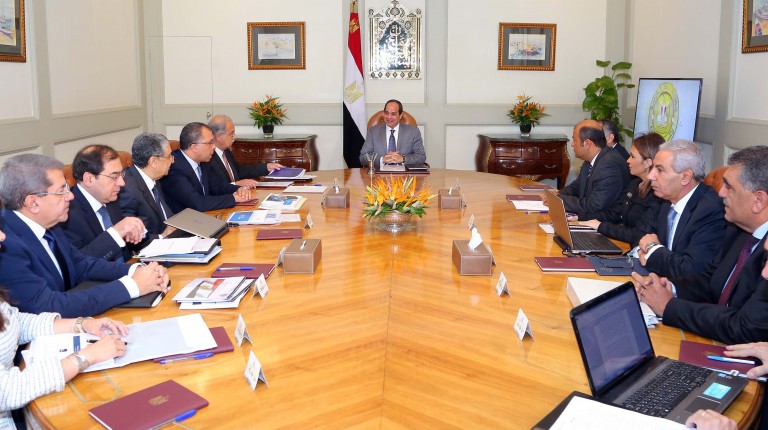 President Abdel Fattah Al-Sisi said in a meeting with Prime Minister Sherif Ismail and members of the Economic Ministerial Committee on Wednesday, that acquiring loans from the International Monetary Fund (IMF) aims to improve and strengthen international confidence in the Egyptian economy, attract foreign direct investments, achieve exchange and financial stability, and fix foundational problems in the economy.

Al-Sisi also stressed the importance of achieving the needed balance between rationalising state budget spending and energy consumption, and limiting their repercussions on the underprivileged. This comes as part of the country’s economic reform programme, which plans to expand protection and social support, while maintaining the prices of primary food commodities.

Al-Sisi asked the government to rationalise government spending and encourage the purchase of local products, while decreasing the reliance on random imports. This should stabilise exchange and financial conditions and decrease unemployment rates.

Following the announcement of the IMF loan, the Egyptian Exchange (EGX) increased by 5% during Wednesday trading while the US dollar exchange rate decreased by over 50 piastres on the informal market.

The meeting highlighted the importance of rationalising energy consumption given that the current consumption of natural gas and petroleum products rounds up to $1bn per month.

The aim of the programme is to overcome the foundational obstacles from which the Egyptian economy has encountered over the past years. These obstacles negatively affected the growth rates of development, investment, and employment, which is why the president urged the government to start taking action in the programme’s implementation.

Official spokesperson for the presidency, Alaa Youssef, said that Al-Sisi discussed the latest developments in the exchange market as well as the economic and financial status of the country with the Economic Ministerial Committee members. Additionally, the meeting also revolved around the outlook of economic indicators and the state budget of fiscal year 2016/2017.

Youssef stated that the attendees of the meeting also looked into the possibility of increasing the country’s resources as part of the economic reform programme. They agreed that, in order to attract local and foreign investments, international bonds would be offered in international markets instead of shares of state-owned companies.

The Economic Ministerial Committee includes the governor of the Central Bank of Egypt and the ministers of planning, supply and internal trade, electricity and renewable energy, international cooperation, petroleum and mineral resources, trade and industry, finance, investment, and public sector affairs.

Youssef added that during the meeting, Ismail presented the outcome of the Economic Ministerial Committee discussions, in order to allocate the necessary funds and to retain the economic stability in exchange and financial markets.

Ismail also updated the attendees on the latest developments of Egypt’s negotiations with the IMF about the country’s economic reform programme, which is set to be implemented through a financial programme over the span of three years.

An IMF delegation is set to arrive in Cairo within days, and negotiations will be concluded by the governor of the Central Bank of Egypt and the Minister of Finance. Afterwards, conclusions of the negotiations will be presented to the cabinet for approval and the taking of necessary measures, in order to bring the outcome to the parliament floor.