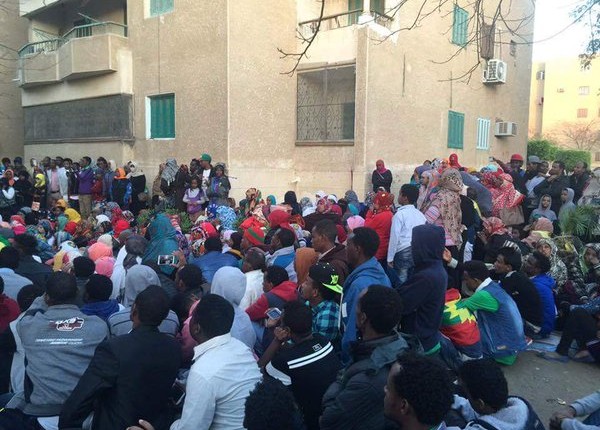 While information surrounding the situation remains unclear, the incidents reportedly took place as part of a protest led by Ethiopia’s Oromo community that sought to demand the right to seek asylum with the UNHCR.

The UNHCR released a statement on Wednesday expressing condolences to an Ethiopian Oromo woman who died during the protest, although the statement did not clarify whether the woman’s death was the result of her setting herself ablaze, only attributing her death to a “violent incident”.

According to the statement, the woman had two young children.

A source, who attended the protest and asked to remain anonymous, said that the woman who died did not set herself on fire, but was attempting to assist the man who had set himself on fire when she also caught fire. One of her children, a 10-year-old daughter, was present at the protest

“UNHCR is mindful of the frustrations and anxieties that asylum seekers and refugees may feel because of lengthy procedures, due to the high number of applicants in Egypt,” read the statement. “As UNHCR is committed to ensure fair, consistent and transparent processes for asylum-seekers and refugees of all nationalities, it calls for the cooperation by all refugee communities and appeals for their understanding and non-violence.”

A video being circulated online by the Oromo refugee community in Cairo shows two Ethiopian Oromo asylum seekers, purportedly including the female mentioned in the UNHCR statement, who reportedly set themselves on fire during the protest.

This protest was part of continued attempts by the refugee community in Egypt to demand that the UNHCR recognise their communities, among other demands for fair treatment.

The Oromos are an ethnic group primarily in Ethiopia but also in other neighbouring countries. Although the group is considered the ethnic majority, they are largely politically marginalised and forced to assimilate, which has led to many Oromos choosing to flee Ethiopia and seek asylum elsewhere.

According to a source, who asked to remain anonymous, the UNHCR is currently denying asylum-seeker status to the Oromos, which means they cannot seek support from the UNHCR or any of its partners. The source explained that as Oromos are considered the majority population in Ethiopia, it is disputed as to whether or not they can be considered refugees.

Asylum seekers in Egypt are often made to wait months, but often years, by the UNHCR in order to for their paperwork to be processed, for either resettlement or to stay in Egypt.

The Egyptian government signed a memorandum of understanding in 1953 that makes the UNHCR solely responsible for registering and determining the status of refugees in the country.

According the UNHCR’s website, as of December 2015 Egypt was host to over 180,000 refugees from around the region, predominantly from Syria, Sudan, Ethiopia, Eritrea, and Iraq.

Daily News Egypt contacted the Interior Ministry and Ethiopian Embassy in Cairo for comment. Both said they had not received any news about the incident. UNHCR was also contacted for a statement, but no one was available for comment.