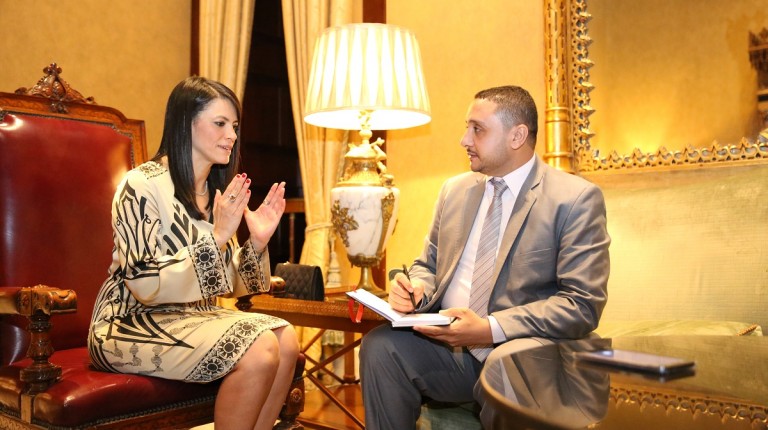 Al-Mashat left Egypt on Saturday to begin her three-year position at the IMF. She talked to Daily News Egypt before her journey to discuss her new role at the IMF, as well as the events she witnessed behind the scenes during her 11 years at the CBE.
Firstly, we would like to know about the nature of your position at IMF.
Both the World Bank and the IMF have a position titled economic counselor and director of research, which is one of the most important and economically influential positions in the two institutions.

Maurice Obstfeld has this position right now. He is, of course, a renowned economist and academic, especially for his extensive work on monetary policy, capital flows and exchange rate regimes.

The Research Department (RES) at the IMF is similar to a think tank for cutting edge economic topics that are in line with the evolving economic challenges. In addition to conducting economic research, RES is responsible for projecting global growth and investigating multilateral surveillance issues.

In light of my previous stint at the IMF and my experience at the CBE, I was offered this position. My operational and practical experience at the CBE, in addition to my academic background, is expected to add an enriched dimension to interactions and IMF surveillance activities with different member countries.

Will you be working to assist certain countries?
No, I am not bound to any particular geographical region. My profile will include all emerging countries. I have recently visited Georgia, leading a team to assist the National Bank of Georgia in designing the modalities of financial stability.

I will also be involved in multilateral surveillance activities which include the repercussions of recent global developments, such as China’s economic transformation or Brexit on member countries’ economies and macroeconomic policies.

How can you serve Egypt through your new position?

Being an Egyptian national in a multinational institution, actually the leading global international financial institution is an important representation of Egypt.

You were the liaison between IMF and the CBE for years. How would you describe relations between the IMF and Egypt over these years?

Indeed, I was the CBE’s liaison with the IMF, assuming a leading role in technical discussions during Article IV missions, technical assistance missions, and IMF-Egypt program negotiations. Technical discussions involve designing the macroeconomic framework in coordination with other ministries and government agencies. I was also the coordinator with the international credit rating agencies.

Egypt engaged previously in rounds of program negotiations in the period between 2011 and 2013. A staff level agreement was reached in both 2011 and 2013. However, due to domestic reasons, the programs didn’t go through.

Through your previous work at the IMF and as a representative of the CBE in negotiations with the fund, how are agreements reached and under what conditions?

The role of the IMF is to assist its member countries in achieving macroeconomic stability, which is the main role of the central bank and ministry of finance in any country.

The IMF supports this through three key channels: first, it’s surveillance role during Article IV missions which is conducted once per year; second, through technical assistance missions on specific topics; and third, through lending under IMF programs.

With respect to the first channel, I would like to point out that the economy of any country consists of four sectors: the real, monetary, fiscal, and external sectors. These four sectors are linked together in different ways. The IMF Article IV missions study these links and evaluated the various policies that affect the interlinkages between the sectors. This is followed by providing recommendations to strengthen macroeconomic policies.

The second role of the IMF is to provide technical assistance to countries in specific areas, such as tax policy, customs, open market operations, modelling, statistics, or other technical advice related to improving macroeconomic policies.

The third role is lending countries seeking loans. This is done after a series of negotiations between the loan-seeking country and the IMF. To obtain a loan from the IMF, a country presents its home -grown program.

The latter has a direct relationship to the investment climate and overcoming the obstacles that impede investment in order to improve competitiveness.

This is usually consistent across member countries which request IMF loans. All rules related to IMF programs are posted on the IMF web-site.

You took part in the banking reform programme prepared by the CBE between 2004 and 2007. What is your assessment of this programme?

The best proof of the success of this programme is the Egyptian citizen’s confidence in the banking system, as evidenced by their eagerness to increase their savings in banks without worry, even in the midst of crises, such as the global financial crisis and the revolution Egypt witnessed following that.
A lot of capital from Egyptians abroad flooded to Egypt during the financial crisis, driven by their trust in the Egyptian banking system.

Do you think we need another banking reform programme now?
Development is a continuous process, whether in emerging or developed countries. New Challenges and risks face central banks worldwide alike in different ways.

The easy flow of capital from one country to another—positive as it may seem—is also a major challenge for central banks. They [central banks] in any country must be able to cope with these rapid domestic implications.

We should also invest in looking at other countries to learn from their experiences. In the old days we used to say “learning by doing” now we say “learning by others”. Given the evolving challenges, there is not enough time now to learn by doing, which means policy makers need to be flexible and show a high degree of agility to mitigate the economic impact of these challenges.
The global markets have witnessed and undergone changes since the global financial crisis in 2008. Just to give an example, quantitative easing has been an unprecedented tool. There used to only be conventional monetary policy now we talk about unconventional monetary policy.

You worked at the CBE for 11 years. What is your assessment of that period?
Egypt has witnessed dramatic economic transformations during this period. The CBE initiated the banking reform programme in 2004, which was part of the government’s overall reform program.
The financial crisis followed a few years later. It had repercussions on Egypt’s fiscal and monetary policies, as well as its economic growth. Central banks, always, have a pivotal role in such crises to minimize the impact on the economy.
Egypt was able to dust off the impact of this crisis. However, not long after that, the January 2011 revolution took place. It changed the political and economic landscape of Egypt. This was later followed by the Muslim Brotherhood regime and finally the June 30 Revolution. The experience acquired during the whole period had been unprecedented.

Will you take the experience you gained during these years to other countries that you will assist?

Yes, definitely. My 11-year experience in Egypt was full of challenges, especially as I was responsible for one of the most, if not the most important pillar at the central bank, namely: monetary policy. This gave me a lot of experience.
I think that when the policy advice comes from within the central banks’ kitchen, it will only support their credibility and the credibility of the fund and enhances its ability to communicate with different countries.

Furthermore, when supply shocks are consecutive, they weaken the impact and effectiveness of monetary policy tools—whether they were resulted from distortions in distribution channels, chronic diseases affecting prices of poultry and meat, or the climate that could hike the prices of food. Mitigating the direct impact of these shocks can not be achieved through conventional monetary policy tools.

Which indicators are considered when making decisions on interest rates?
When a central bank decides on its policy interest rate, it considers a host of global and domestic factors.

With regard to the global economy, the monetary policy committee focused on the global economic growth rates and inflation rates in trading partner countries; prices of international commodity prices, particularly food and oil prices, as well as interest rates and exchange rates, given the impact they can have domestically.
Domestically, the Monetary Policy Committee focuses on the analysis and indicators of economic performance. It is not important for the committee to go beyond the numbers and investigate in depth the macro story behind the numbers.
Also among the indicators taken into account when making interest rate decisions is the inflation rate and whether it was caused by demand shocks or supply issues, as well as the size of operational liquidity in the market and its impact on inflation.
Monetary policy is supposed to be preemptive. It should not look at the current situation only, but also to its future.

Price stability is the main objective of any central bank, being an important factor in determining the country’s competitiveness.

What does the IMF consider to be the most important economic issues?
Financial stability is one of the key concepts in focus by the IMF. This concept has emerged strongly after the global financial crisis, which showed the origin of problems related to the supervision of banks. However, financial stability does not have an agreed on definition yet.

The central banks of any country have a supervision role over banks. Sometimes, central banks can go beyond supervision and impose further restrictions on banks to protect the system from potential crises. But these crises could hinder the economic growth of countries.
Hence the importance of balancing between a strict supervisory role and procedures during tranquil times to avoid crises and the impact of these controls on economic growth is important in defining financial stability.

The global financial crisis gave rise to problems that were not visible in normal times. Therefore, financial stability became one of the most important priorities for the IMF.
In my opinion, this is where the importance of cooperation between the IMF and central banks come to better define policy concepts from a practical and operational dimension. They [central banks] should not hinder growth and operations, but at the same time, protect banks.

The difficulty of achieving financial stability lies in the lack of defined tools to achieving it. It is different from one country to another, depending on the state of the banking system, situation of the exchange market, whether or not there was dollarisation, and the volume of non-performing loans in the local banks.