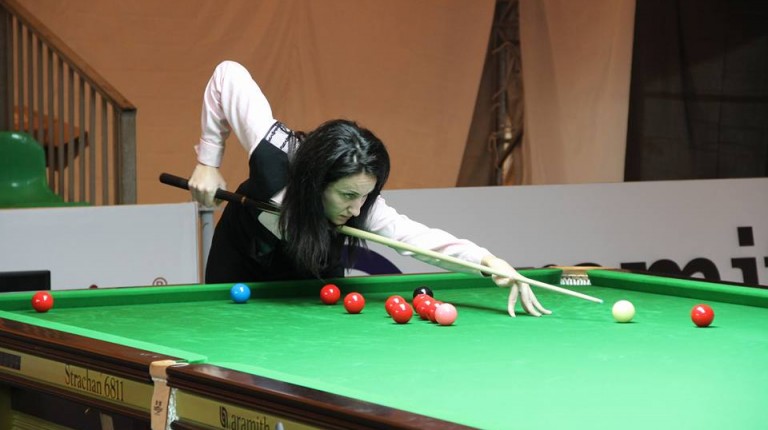 Ahead of the 2016 IBSF World Snooker Championship, Daily News Egypt met with Latvian snooker champion Tatjana Vasljeva to discuss both the failures, which pushed her to work harder, and victories she experienced throughout her sporting career.

In 2013, Vasiljeva became Europe’s champion after winning Europe’s Snooker Championship, which took place in her home of Latvia that year.

Her studies, and the fact that she has spent so much time living far from the Latvian capital, did not prevent her from practising the sport in Riga and succeeding in her sporting career.

How did you begin your career in this sport?

When I started, I did not live in Riga, the capital of Latvia. The city where I lived, Daugavpils, was quite far from Riga. I started to play American pool in Daugavpils.

It was difficult, as there were no ladies practising the sport, only men. It then became my dream to develop my skills in the sport.

In Riga, there were billiards schools. So, every Sunday I used to wake up at 4am and take the 5.15am bus. The travel from my own city to Riga took three and a half hours one way. In Riga, I used to practise for four hours, then return back to Daugavpils. I did that for half a year.

How old were you when you did this?

I was 17-years-old, and I was in my third year of college, where I studied programming.

How did your family show support?

My grandfather played an important role as he helped me move from my own city to Riga to practise.

How did you shift from pool to snooker?

So snooker is more difficult than pool?

It is more complicated in terms of its rules and the gameplay, so it is more interesting.

You mentioned that you met your husband thanks to the sport. Can you tell us about that encounter?

I met my husband when I started to play snooker. He is also a snooker player, named Vilnis Mainulis. As of now, we have been together for 15 years. We have a great daughter who is almost nine-years-old.

At the time we met he was a better player than me. He helped me a lot in the sport.

When was your first national title?

Are there many women participating in these ladies national snooker championships?

In the 2002 Ladies National Snooker Championship, we had around 16 women participating. The number was becoming less and less as some competitors got married and had kids. They got busy with their work and family and it became difficult for them to practise much.

Now in Latvia, only five female players are left.

Did being pregnant impact your sports career?

It was difficult, yet I was determined to succeed. The last Ladies Latvian Championship was held in 2007. I was seven months pregnant at the time. I played with a huge belly, and I managed to win.

What are your thoughts about playing against men?

In five or six tournaments like this, I reached the finals but lost, including this years’ Latvian National Men’s Championship, where I lost in the final match.

I consider this an achievement because in Latvia we have really good male players. Also, it is not easy mentally to play against men, and it is difficult to believe that you can defeat them.

When did you become Europe’s snooker champion?

In 2013, I became Europe’s champion, when I won Europe’s Snooker Championship, which took place in Latvia.

A year before, in 2012, the European Championship was celebrated in the Bulgarian capital of Sofia. I reached the final but lost.

What does this victory represent for you?

In terms of the 2012 European Snooker Championship, reaching the final was also a big step, but I lost to Janans.

Have you been successful in world snooker championships?

I reached the semi-finals three times. To be honest, the skill level of participants there is very high.

How did you come about participating in the Professional Snooker Tournament?

About a month ago this year there was one held in Riga, where only the top 64 players participated. It is difficult to get accepted to participate in a professional tournament, but I was lucky enough to receive a wild cut (invitation) that enabled me to secure a place in this tournament.

Why did you receive this invitation?

I received it because Latvia was the hosting country, and because there are efforts to promote the game among women.

How did you perform in this professional tournament?

I played against international snooker hero, Hong Kong’s Marco Fu Ka-chun. He is ranked 12th among the professional players and has played snooker for around 20 years.

This was the best match I have ever played in my life, and I had the chance to defeat him, but I lost.

I exited the tournament, but I was surprised that I could play this good.

What is your current international ranking?

I am the fourth or the fifth.

Can you name a significant Latvian male snooker player?

Radiom Judin is only 19-years-old, and he is very good. I lost to him last May in the final match, at the National Snooker Championship.

I believe he has a very successful future in the sport.

What are the most famous sports in Latvia?

I think it is ice-hockey then basketball. Our national ice-hockey team is quite strong, and we have many players who sign with clubs in America and Canada to play there.

Is snooker popular in other Baltic countries, such as Lithuania and Estonia?

In Lithuania, snooker has a better reputation than in Latvia since Lithuania has more players.

When you mentioned Estonia, I could only think about Andres Petrov. Petrov is a very talented Estonian snooker player who is definitely the best in the Baltic area, and I believe he is the best player in Eastern Europe.

Were you not concerned to participate in a championship in Sinai, after the recent unfortunate events that occurred and the rumours of Egypt being an unsafe place?

In 2014, the 2014 IBSF World Snooker Championship was held in Sharm El-Sheikh. I was reading about the situation in Egypt, and I was afraid to come and participate. However, when I spoke to Mohamed Kammah, president of both the Egyptian Federation of Billiard Sports (EFBS) and the African Billiards and Snooker Federation (ABSF), he explained the situation for me, and clarified that it was safe and calm.

Since I was young, I was interested in the history of Egypt. It has a really fascinating history, climate, weather, and the sea, where you can swim and dive.

In 2014, I came to participate in this championship. My mother and daughter came with me. We enjoyed our stay a lot. We went to a boat trip and to the city centre. I have to add that people were so friendly and kind. It was very safe and enjoyable.

I talked with friends and family, telling them the truth about Egypt being a safe and enjoyable destination.

In 2015, the same championship was organised, but that time it took place in Hurghada. Again, I came and participated, and my mother and daughter came with me.

And here I am now, participating in the 2016 IBSF World Snooker Championship, enjoying my stay in Sharm El-Sheikh.

Was it difficult to find a flight to take you to Sharm El-Sheikh?

I had to travel from Riga to Milan, Italy. In Milan I took a one and a half hour bus to change the airports. Then from Milan I took a direct flight to Sharm El-Sheikh.

Women around the world: Latvia