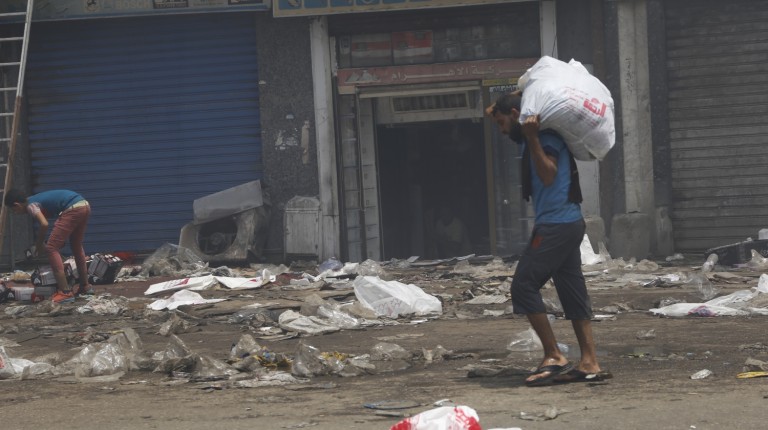 Families of victims of the Attaba fire met on Saturday with member of parliament for Cairo governorate Mohamed Ayman to discuss the decision to remove four buildings in Attaba. The removal was proposed two days following the Attaba fire on 8 May, according to Wael Tawfik, the media coordinator of the Legal Cooperation to Support Labour Awareness.

During the meeting, the MP and a group of residents also discussed the development of the Roweiy district that witnessed several damages due to the fire.

One of the residents told Daily News Egypt that they will resort to court if they fail to find a solution with the governorate. He noted, however, that the MP has been helpful and cooperative.

The families also met with Ayman on Thursday and agreed to notify the Ministry of Housing to form a committee in order to assess the buildings’ stability to decide whether they need to be demolished or not.

Prior to Thursday’s meeting, the families arranged a protest against the removal decision in front of the MP’s office in Mogamma.

The governorate administration insists on removing the buildings despite reports by two technical committees formed by the faculty of engineering of Banha University and the Engineering Syndicate, that confirmed the stability of the buildings.

The committees’ reports clarified that the buildings’ stability ranges between 78% and 80%, which does not indicate a possibility of collapse. Both committees were formed upon requests of families to check the validity of their buildings.

A third committee was formed by the governorate administration following the families’ demands, which also confirmed the stability of the buildings. However, this was not announced to the families, which made them consider the move as a deliberate procrastination, according to a statement by Legal Cooperation to Support Labour Awareness.

Tawfik told Daily News Egypt that the residents of the buildings had previously appealed the removal decision, complaining that removal was decided without technical assessment over the building’s validity.

He also said that the families believe that there might be a deal between the governorate and the building owners, claiming that the owners want to sell their buildings.

Tawfik added that the governorate wanted to compensate the families in exchange for the buildings’ removal. The residents commented on the compensation matter saying that they rejected it and demanded it be excluded from their discussions.

The decision was taken two days after a fire broke out in a building near a popular market in Attaba in central Cairo. The blaze quickly spread to other buildings and the nearby marketplace, and left three people killed and at least 90 injured.