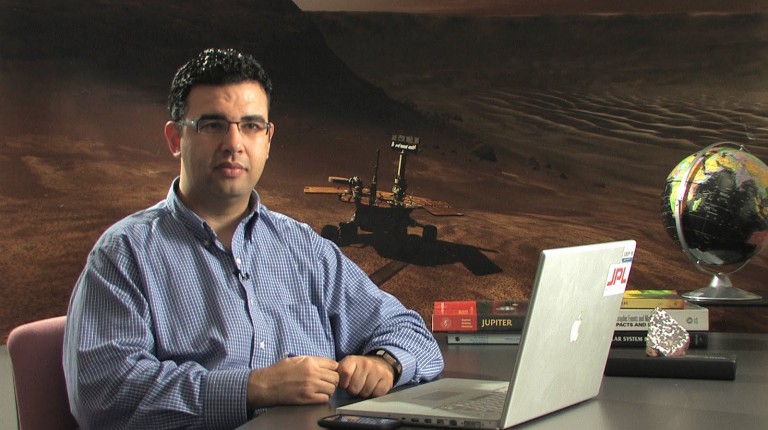 This presidential team will consist of people who played their part in igniting the spark for the 25 January Revolution back in 2011, Heggy said.

“The presidential team will win the 2018 elections, even if President Abdel Fattah Al-Sisi also runs as a candidate,” Heggy said in a televised interview broadcast Saturday from London-based Al-Araby TV.

Regarding his role within the team, the NASA scientist explained he will only provide help in the scientific field, adding that no leading role will be assigned to him.

“The presidential team project will focus on providing solutions and generating ideas on five main fields—women, education, health, economy, and equality—with the help of other young people. The presidential team will be a political alternative for Egyptians,” he said.

In a statement published on his Facebook page, Heggy highlighted the main purpose of this initiative which is to lift Egypt back up from the currently poor conditions of sordid poverty, ignorance, and disease. He is determined to end these problems and achieve high levels of education and healthcare.

“‘The presidential team is working to establish a civil state that employs young experts to achieve progress. I believe that education and science are the only way to liberate Egypt,” the statement read.

Professor of political science at Cairo University Hassan Nafaa told Daily News Egypt Sunday: “Nowadays, it is important to allow Egyptians a political alternative; however, this is not an ‘initiative’ as it still falls under the establishment and may fail due to the scattering of political opposition groups.”

Nafaa, who was a co-founder of Kefaya Movement which was one of the prominent opposition movements in the Mubarak era, explained: “The problems among political elite in Egypt are insidious and this will complicate the process of nominating a new presidential candidate or participating in forming a new political substitute.”

Many people have come out and said that the presidential team project will fail. Member of the Coalition for Revolutionary Youth Shady El-Ghazaly Harb considers these predictions to be part of a “media attack” sponsored by the current regime against Heggy after he declared his intention to formulate this initiative.

Harb told Daily News Egypt on Sunday that any honest political entity that seeks progress in Egypt should warmly welcome Heggy’s initiative as it will activate the currently sluggish political atmosphere in Egypt.

“My only reservation about the presidential team is that the absence of a real democratic regime may lead to its failure, but we should engage in discussion so that we can avoid failing like similar experiments,” Harb said.

The current political regime is oppressive and will not allow for easy power transfer. Egypt is currently suffering from a great absence of political activity. Egyptians nowadays are living through a “one-voice state”, Harb added.

The members of the presidential team will be revealed directly after the preparation stage and discussion of ideas are completed.

During the televised interview, Heggy called for a national comprehensive reconciliation process that includes all Egyptians. This reconciliation is to include the release of all political or religious detainees.

Heggy was born in Tripoli in1975. He studied astronomy at Cairo University and then went on to acquire his doctorate from Paris in the field of planetary discovery, making him the first Egyptian scientist to hold such a degree. Heggy is currently working with NASA.

Heggy has been critical of the current regime’s policies related to education, health, and security.