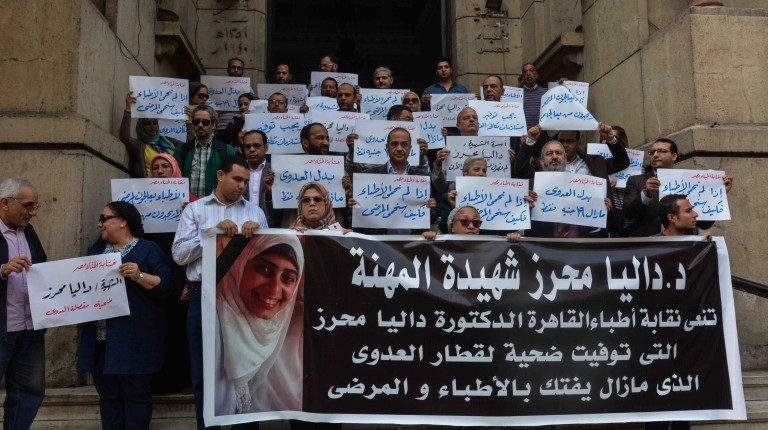 Dahlia Mehrez’s beaming face is emblazoned on a poster with a statement about her death from contracting an infection printed next to it. Behind it, dozens of doctors stand holding smaller, more aggressive signs, Arabic letters bolded in red, blue and black, calling out the Egyptian government for the lack of compensation provided to doctors at risk of contracting highly-infectious diseases.

“If we don’t protect the doctors, how can we protect the patients?” one of the posters read.

This was back in November 2015. Since then, despite agreeing to raise the rate of compensation from EGP 19 to EGP 1,000, cabinet members are yet to implement the increase. Recently, the Doctors Syndicate distributed a survey that addresses how to direct the public’s attention to the cause.

The questions, which are directed at doctors dispersed across the country, ranged from whether an online hashtag should be formed to whether government officials should be contacted via email or fax. This survey falls in line with the syndicate’s efforts to transform the government’s decision into something more concrete.

The syndicate states that doctors in Egypt are at high risk of contracting an infection in their workplace. In public hospitals, equipment is often not sterilised, quality-control teams rarely formulated. A lack of overall funding is evident on every dusty doorknob and every dirty needle.

“The work environment here is very dangerous, we are more susceptible to diseases than anyone else,” said Nahla Abou El Wasa, a clinical pathologist at Cairo Lab. “If judges are compensated EGP 3,000 per year for the risks of being in a crowded room, then doctors, who directly interact with patients, should be at least given EGP 1,000, if not more.”

Despite this highly pertinent risk, cabinet members instantly responded to the State Council’s decision last November with an appeal that did not go through. The syndicate recently sent a letter warning of future legal action if the cabinet continues to curb funding.