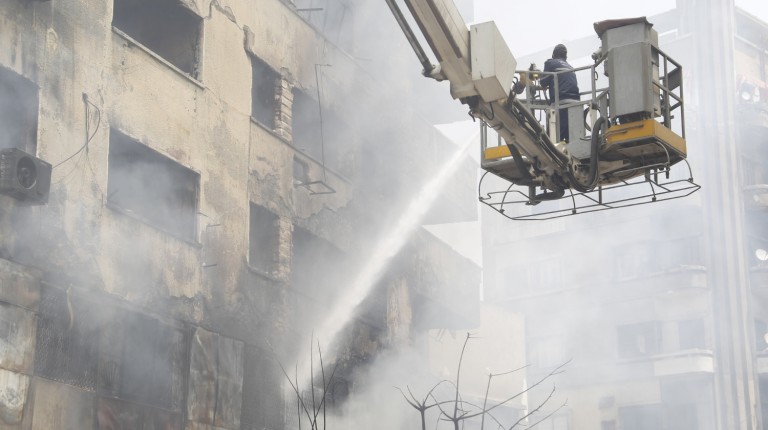 The victims of the Attaba fire demonstrated on Thursday to protest the decision to demolish four buildings following the fire which took place on 8 May on Roweiy street.

The protesters demonstrated in front of the headquarters of the Cairo deputy governor’s office at the Mogamma, coinciding with a meeting that was held between the committees responsible for reporting technical issues related to the fire.

The demonstrators protested against the delay of the governorate in considering the grievances filed by the four buildings’ tenants against the demolition of the buildings. The decision was issued by the Moski neighbourhood in the Cairo governorate on 15 May.

Residents of buildings 7, 11, 13, and Al-Andalus Hotel, which are located in Attaba Square, charged those responsible for issuing the decision of colluding with property owners, who have long sought to sell the buildings’ land to take advantage of the rising real estate prices tagged to the area.

The residents asked for assistance from the technical committee in the Engineers Syndicate and a committee from the Faculty of Engineering at Shubra at Banha University to assess the decision. The two committees agreed that the decision was invalid.

The protesters accused the governorate of insisting that these buildings be demolished, adding that those affected by the fire have not been paid any kind of compensation.

They said that the decision only benefits building owners who seek to demolish the buildings to sell the plots to investors.

The protesters further claimed that the governorate neglected to form a committee of specialists that could accurately assess the buildings’ integrity. As a result, the protesters assigned the two aforementioned committees with the task of assessing the buildings’ conditions.

According to the protesters, the specialists they assigned to assess the damage claim that the government’s decision was ill-founded, while the government remains determined to see the demolition through.

The protesters also rejected the compensation offered by the government, stressing their adherence to their right to legally stay in the buildings, according to technical reports that recommended repair rather than demolition for the buildings.

The fire victims demanded that officials investigate why the governorate is insisting on the demolition of the buildings despite the lack of cause to justify such a decision.

Cairo deputy governor Mohamed Ayman declined to consider the protesters’ complaints, despite the lapse of more than 50 days since the complaint’s submission. The protesters argue that this is unjustified procrastination.

Ayman said that there will be no retreat from the decision to demolish the burned buildings and the governorate may discuss compensation for its inhabitants.

However, he promised to hold another session Saturday to re-negotiate with the governorate regarding the decision to switch from a demolition order to a restoration of the affected properties and buildings.

Daily News Egypt attempted to interview some of the protesters; however, none of them expressed an interest in speaking on the record.

Regarding the report drafted by the Engineers Syndicate, of which Daily News Egypt obtained a copy, the committee recommended re-evaluating the Al-Andalus building to consider its restoration, opting not to demolish it.

With regard to buildings 11 and 13, the committee recommended quickly adopting a resolution to restore and strengthen the buildings; however, it recommended the demolition of building 7 because its dilapidated state makes it dangerous.

The committee formed from the University of Banha recommended that building 13 be supported by steel throughout the restoration work and that repair works must be done by a company specialising in restoration under the supervision of the Faculty of Engineering at Shubra. The restoration must also strengthen and repair the concrete elements that were damaged in the fire and remove all irregularities in the building, including partitions or walls of plaster, wood, or steel.

The committee also stated the possibility of reusing floors in the building from the third floor and above immediately after removing irregularities.

The fire, which broke out in the six-storey Al-Andalus Hotel on Roweiy Street, spread to neighbouring buildings, damaging the properties along with vendors’ goods and wares in front of the buildings.