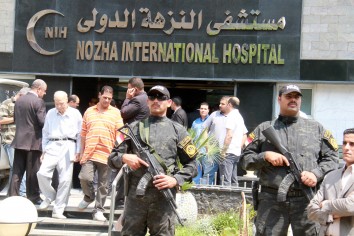 The court acquitted on Sunday two defendants in the Hisham Barakat assassination case who were previously charged with insulting the judiciary and sabotaging the trial session. The court also postponed the trial to 16 August.

The two men, Mostafa Ragab and Mahmoud Al-Ahmady, had shouted when inside the box where defendants are held, and had reportedly raised their shoes in the face of the judge. The court initially sentenced them to two years in prison, but withdrew the decision following an apology from the accused.

The prosecution exhibited the case evidence and videos allegedly showing the attack in Sunday’s session.

The defence continued with their demand that an independent forensics committee examine the defendants following claims of torture. The lawyers said the detainees were subjected to various violations, such as being forcefully disappeared prior to detention and being “forced to confess false crimes under torture”.

In a previous statement on 30 July, the detainees’ families called upon security forces to “respect the humanity” of the detainees and give them the right to visitors, to family delivering clothes, food, and medication, the right to purchase food from the prison canteen, as well as allowing them to walk around and “see the sun” in the prison yards. The statement also demanded that the prisoners not be held in solitary detention.

The defendants are facing several charges, including establishing an illegal group, executing hostile operations against judges, army, and police officers, as well as targeting diplomatic headquarters and aiming to destroy state institutions.

According to the charges, the outlawed Muslim Brotherhood group employed methods of terrorism to execute the aforementioned indictments.

Trial of assailants in Hisham Barakat assassination postponed to 13 July