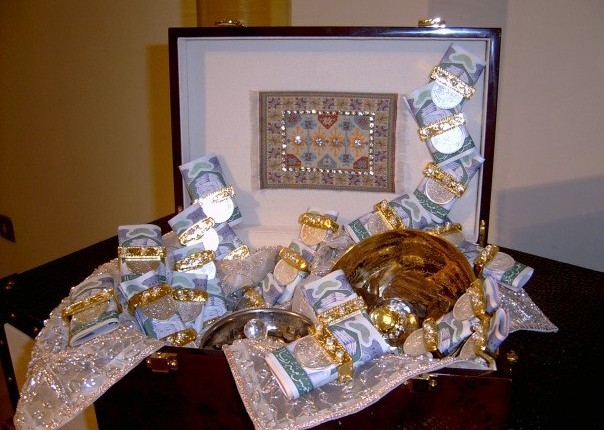 Marriage traditions have always differed from one country to another. Over the years, that eternal bond has become increasingly materialistic, and love is currently judged on how fancy a couple’s wedding is and on the money invested into their marriage. In Egypt, shabka has always been an inseparable part of marriage ceremonies.

Shabka is a set of gold accessories a groom usually gives his bride before they tie the knot. Both families sit together to discuss the amount of money paid for the shabka and to determine how many pieces it should consist of. Throughout generations, it has become a common tradition and belief that the more money is paid for the shabka, the more the bride is appreciated.

However, with the continuous hikes of the price of gold in the market, shabka has become a burden for many young couples who cannot afford it. In an attempt to change society’s mainstream belief, a group of young people released a campaign called “We will turn the shabka into silver… It is cheaper and more elegant”.

The campaign aims to convince people to use silver for the shabka instead of gold. That way, the shabka tradition will continue, yet it will save the newlywed couples money while still looking as elegant as gold.

“Shabka is the very first step of any marriage in Egypt, and with the current, extremely expensive prices of gold, it has become the biggest burden any man has to bear in order to start his life independently,” said Haitham Abdelaziz, one of the campaign’s organisers.

According to traditions, the price of the shabka differs from one socioeconomic status to another. However, it usually starts from EGP 10,000 and could go all the way up to EGP 100,000, or even more. Recently, shabka has become a source of bragging for a individuals and families.

“While young couples can spend a lifetime collecting the money required for purchasing the shabka, they can go for a silver alternative for only EGP 1,500,” Abdelazziz stated. “Marriage is a holy bond, and it cannot be measured by the money spent on it.”

The campaign, which was launched last week, grabbed the attention of many young people who seek to change outdated, mainstream marriage ceremonies.

“With the prices these days, we will never be able to get married with the same traditions as our parents,” one user said on the campaign’s official Facebook page.

As a positive response to the campaign, some female activists launched another online campaign called “We don’t want a golden shabka—silver is more beautiful”. Through several posts, girls expressed their willingness to get married with only a few simple silver accessories.

“I’m willing to get married with only a wedding ring. I won’t require much when I find the right man,” a girl said in a comment.

While both campaigns were highly welcomed and accepted by youth, parents still gave their children a hard time before accepting the fact that their daughters might get married with an inexpensive shabka.

From many parents’ points of view, reducing the amount of money paid for the shabka means not giving their daughters the care they deserve. They fear that this might allow the groom to harm their daughter because he did not pay much in order to marry her.

“As a lawyer, I received many calls from worried fathers who asked how they can save their daughter’s rights without asking for a high-priced shabka. It is not a matter of gifted gold anymore. It has turned into an assumption that parents are saving their daughter’s rights by demanding the groom to pay huge amounts of money,” according to Abdelazziz.

The pay-up theory applies to almost every step in marriage in Egypt. It starts with demanding that grooms own a fully-furnished apartment, in addition to them paying for an expensive wedding, a dowry, and for the honeymoon.

Even though marriage in Egypt is one of the most expensive life events any person could experience, shabka still holds many different ethical functions in the parents’ eyes.

“When I agreed to marry the man I love with a silver shabka, his mom thought I was head over heels for him, even though he was unemployed and I was the strong independent partner in that relationship,” said Azza Abdel Moneim, one of the girls who opposed the campaign.

From Abdel Moneim’s point of view, the whole marriage process in Egypt is “spoilt” and needs rehabilitation. She also believes that if young couples managed to get married without a shabka, they will not be able to convince their parents that it is not an insult to a girl if she does not receive a set of gold accessories.

Despite the widespread calls for encouraging a silver shabka as an alternative for gold, some parents require grooms to buy shabka at a certain price. “When my cousin proposed to his wife, her parents obliged him to pay at least EGP 35,000 for shabka,” said Abdel Azim Saafan, a Facebook user.

“We’re currently working on turning the virtual campaign into an offline one,” Abdelazziz said. “We’re planning on going down the streets to talk to older generations and convince them to change the way they think and help their children get married easily.”

Early Marriage: a photography project worth a thousand words

From pharmacist to writer: The diaries of a girl who wanted to get married

Child marriage in Egypt: ‘I don’t know how old I am’

Our society has double standards, even though it’s a conservative community