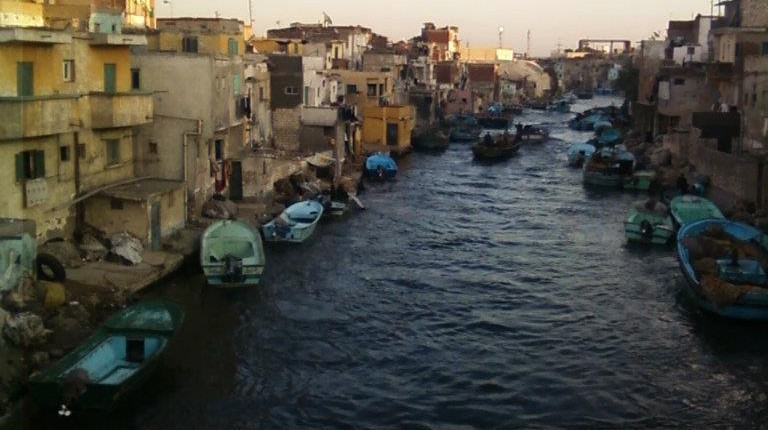 The Egyptian Center for Economic and Social Rights (ECESR) published on Monday a study on the Al-Max area in Alexandria, highlighting the struggles of its residents and the various challenges they face.

Often dubbed as Alexandria’s Venice, Al-Max is a relatively small neighbourhood with colourful, old, low-rise buildings sitting along Lake Mahmodeya, which connects Alexandria to the Nile River through Rasheed.

The study, which was conducted over 27 months, highlights Al-Max’s water pollution issue, the deterioration of public services, and the displacement of residents, among other issues. The study relied heavily on field visits and interviews with residents. The study also cited several scientific and governmental documents related to Al-Max.

Al-Max’s landscape and location has made it one of the most exotic and tourist friendly areas since the early 1800s. However, this study monitors the factors that have led to the current deterioration of Al-Max.

Al-Max is surrounded by at least 13 factories, which started to develop in the area in the late 1980s and early 1990s. The factories are from different industries, including petroleum, cement, iron, and steel.

Among the many challenges facing Al-Max and its residents, pollution is the most pressing. According to the study, pollution has negatively affected residents’ health and the water supply, which is considered a main source of income. 90% of residents work as fishermen.

Pollution coming from factories’ drainage and waste is considered the most dangerous, according to the study. Surrounding factories dump their waste into the canals and water supply of Al-Max, which directly affects the lives of fish and, therefore, the standard of living for a majority of the area’s residents.

“If one cannot fish for one day, he has nothing to eat,” one of the residents told ECESR, alluding to the lack of a stable source of income for fishermen.

Residents interviewed in the study said they came to Al-Max before the factories were in the area, noting that the factories should divert their drainage route instead of displacing residents.

It is prohibited to dump waste in fishing areas according to Law 48 (1982) and the recent amendments made to the code of conduct of the Environment Law in 2011, which are concerned with protecting water resources.

Al-Max is also facing a lack of public services in education and healthcare. The nearest healthcare unit is 40 minutes away from Al-Max if using public transportation, according to the study, and there are only two primary schools located in the area.

In late March, then minister of water resources Hossam Moghazy visited the area as part of the cabinet’s plans to revamp Al-Max and build new residential areas for its residents. Residents said they were ordered to leave their houses in the shortest time possible.