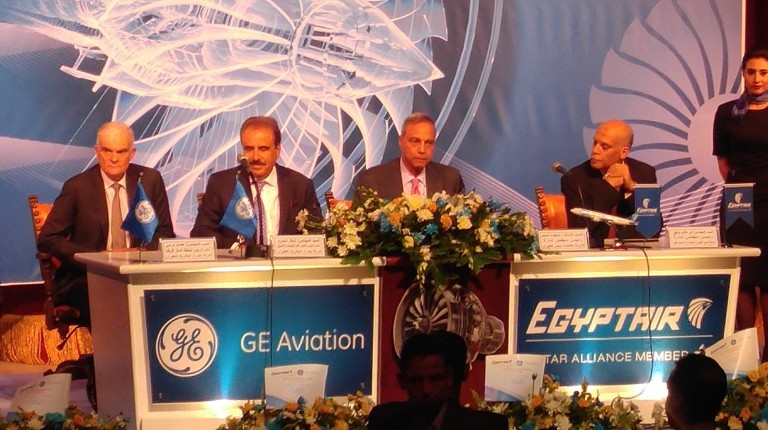 Daily News Egypt sat down with vice president and general manager of Global Sales and Marketing Chaker A. Chahrour to discuss General Electric’s (GE) True Choice Agreement with EgyptAir, as well as GE’s outlook for its role in Egypt’s market and region-at-large.

GE announced previously that it will pump $340m into the Egyptian market during the current year. $200m out of that amount will be dedicated to the establishment of a multi-disciplinary centre for industry and training in Suez, Egypt.

On Thursday, EgyptAir and GE signed an agreement for maintenance, repair, and overhaul consulting services to assist in the development of overhaul capabilities for the CFM56-7B engine.

The comprehensive agreement covers technical support, consulting for maintenance, repair, and operations (MRO), facility readiness, tooling optimisation, and other necessary services required to achieve facility certification. With the intention of deeper cooperation, EgyptAir and GE agreed they will study the possibilities of operating the EgyptAir engine shop together as a centre of excellence in the region.

The CFM56-7B engine has been “highly successful in competing in flights today in a safe environment” as 60% of EgyptAir’s 80 aircraft fleet are equipped with the engine manufactured and developed co-operatively with GE and CFM International.

“The CFM56-bm engine, which has seen 17,000 engines produced with the majority of them still flying, at one point will need to be repaired and we hope to send as many as we can to Cairo to their facilities,” said Chahrour at the signing ceremony held at the Cairo Opera House. “The celebration tonight is just the start of cooperation efforts between our two companies as your success truly determines our success.”

Chahrour has been vice president of the Global Sales Market for GE aviation for two and a half years, having worked for GE for 17 and a half years. He started out as a technician and worked in several engineering roles until he ran a couple GE product lines, such as the GE90, the aeroplane engine discussed in the True Choice Agreement, as well as the CFM engine covered in the agreement with GE’s Joint Venture with Safran. He was the head of the global sales division in Asia Pacific and a Six Sigma black belt.

Can you tell us about why GE is in Egypt for this event?

I am here as the GE executive representative to sign a deal for a partnership between GE Aviation and EgyptAir.

The idea is to make EgyptAir a world class provider of GE and CFM engines, which can make up to 60% of engines in their fleet.

This event is really the culmination of working together and cooperation. Our partnership goes back some 40 years as Egypt has been flying our engines for a long time. We think they are a tremendous company, and in this event we cement our relationship to enable more capabilities. This is a combination of the True Choice Agreement and enabling their own shop to be able to overhaul our engines.

You mention that GE has partnered with Egypt for the last 40 years, but has there been an immediate impetus to push for this restructuring after the crash of EgyptAir flight MS804?

We have been working on the True Choice Agreement for about a year and a half or so, and it’s just truly about the recognition of EgyptAir as a major player in this part of the world. They are the biggest airline in Africa. And we just really wanted to partner with the good airlines. EgyptAir is a big airline in this part of the world and a loyal airline to GE. This is really a recognition of this partnership, and a step to enabling them of maintaining the engines that they fly.

What do you think is the main area EgyptAir needs assistance in overhauling? You’ve mentioned maintenance of engines, but are there any other sectors that could benefit from GE’s expertise?

Repairing, maintaining, and overhauling engines is the top priority alone and not every airline is capable of doing this alone. EgyptAir has been doing some of that, but not on our engines. We visited their shop and we are very impressed with the technical capability and know-how that they have in their shop. This is just enabling them to be able to overhaul a lot faster and a lot more efficiently by lending out our expertise to them and creating a cooperative environment between the two companies.

It seems that GE has a larger strategy at play which was outlined by Jeffrey Immelt at NYU, in which he talked about GE’s localisation strategy, which targets one country’s ability to service the whole region’s needs. Is there any specific reason to choose Egypt over other countries in Africa, such as South Africa or Nigeria?

There are two big reasons. First, Egypt is a very important country for us, not just in the aviation sectors but all the other businesses we have. We are a global company and it has been our initiative to shift our resources into the globalised countries for added supply or operations. Second, EgyptAir is a very good and capable customer for us, and this is really a cementing of that relationship.

Have you found that Egyptian labour is qualified and meets international standards?

Absolutely, they are very smart, and very capable, in addition to very efficient in their work output.

Do you find that safety is a major focus at EgyptAir?

In my line of business, safety is number one and we would never compromise safety. If we had any concerns about EgyptAir’s capability regarding safety, we wouldn’t be here.