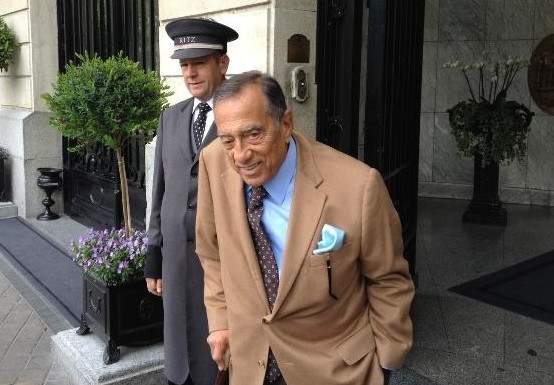 Justice minister assitant and head of the Illicit Gains Authority, Adel El-Said, announced during a press conference Wednesday that the government completed a deal with Hussein Salem to move 75 % of his financial wealth to the state. Salem is a fugitive tycoon and an ally of former president Hosni Mubarak.

According to the deal, Salem, with his family, will be able to re-enter Egypt, after all of them were not allowed to return over charges that Salem faced. Moreover, all asset freeze decisions will be removed.

During the press conference held in the Justice Ministry’s headquarters, El-Said noted that Salem gave EGP 5bn to the state out of his overall fortune that reaches EGP 7bn.

The deal was based on an initiative launched in 2013 by Salem, through which he suggested forfeiting 75% of his local assets and 55% of his assets abroad to the government in exchange for waiving all corruption charges against him.

Salem, who fled to Spain after the 25 January Revolution, recently started negotiations with the current government to drop corruption charges against him in return for repaying a fraction of the value of the funds he is alleged to have embezzled.

In 2000, Salem was accused of illegally acquiring lands for a price significantly lower than their normal actual value, at as little as EGP 20 per metre. He built hundreds of villas on these lands located near the Red Sea. The villas were ordered to be demolished; however, it is widely believed that the order was never executed due to Salem’s ties with the Mubarak family.

Earlier in March, Salem had said in a phone interview with a TV channel that he donated his private jet, worth EGP 100m, to Egypt’s intelligence agency.

A report from the administrative prosecution accused Salem of squandering public funds and embezzling them for personal use. A mining company owned by Salem was accused of extracting phosphate and uranium, and importing it to India without paying the state the share of the profits mandated by the law governing mineral resource extraction.

Recent amendments to the Illicit Gains Law allow Mubarak regime figures to cede their wealth to the state by which they will secure the dismissal of corruption charges.  Former ousted justice minister Ahmed Al-Zind has been campaigning for filling the reconciliation forms since October 2015, claiming it is the only way to retain Egypt’s embezzled funds held abroad.