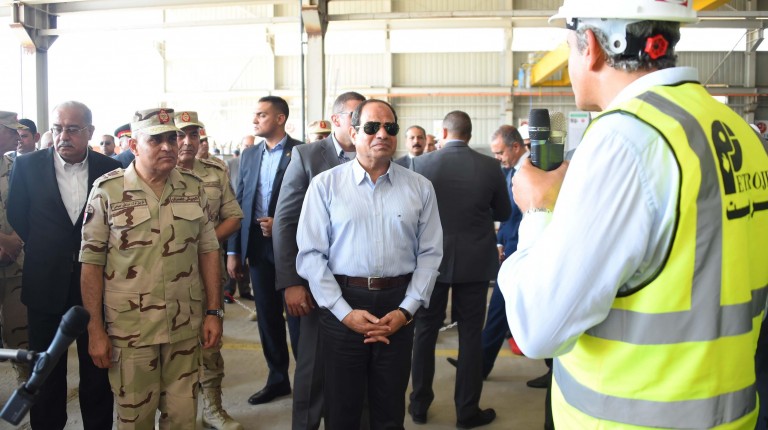 On the first anniversary of the Suez Canal extension, President Abdel Fattah Al-Sisi attended the celebrations in Ismailia at the new Suez Canal on Saturday to inaugurate new industrial projects that serve the infrastructure of the new canal.

In his speech, Al-Sisi warned Egyptians of attempts to discredit the value of national projects and demoralise the population.

The celebration witnessed a similar pattern by which the president toured the locations’ concrete factories and tunnels, which are to improve and develop areas on the shore of the canal, stopped to talk to young people, and listened to engineers from the Armed Forces Engineering Authority.

Al-Sisi emphasised that there are attempts “to change hope into despair”. He mentioned examples of critical reactions, such as the hike in electricity bills, lack of economical and logistical plans in the 1.5m-acre reclamation project and ashwa’yat (informal housing) development initiatives. The president called for “more communication between state institutions and the people”.

After his speech, Al-Sisi commemorated the death of late Egyptian scientist Ahmed Zewail, announcing that the Tahya Masr fund will create a special fund for building the Zewail City of Science and Technology with an intended budget of EGP 4bn. He instructed the army to handle the building of the educational organisation.

Al-Sisi also honoured relatives of former presidents Gamal Abdel Nasser and Anwar Sadat, as Saturday also commemorated 60 years since the nationalisation of the Suez Canal in 1956.

Head of the Suez Canal Authority admiral Mohab Mamish said that the project has achieved profits of $3.018bn. Mamish also exhibited the security measures at the canal, such as apache helicopters and naval military ships.

The project, as well as other national projects, are engineered and financed by the Egyptian army with the assistance of other private companies.

Since the start of Al-Sisi’s rule in 2014, national projects have been presented as the gateway to providing Egyptians with job opportunities and reviving the economy, especially during the time of political unrest and the lack of security between the 25 January Revolution and June 2013.

These projects include the New Suez Canal Project, the new Road Network Project of 4,400 km, 1m acres from the Land Reclamation Project, and the development of the northwest coast, whose budget relied also on preliminary capital from the Taya Masr fund.

The Tahya Masr fund was formed in June following Al-Sisi’s inauguration in efforts to collect donations to stimulate the struggling economy. Al-Sisi issued a decree to establish the fund, granting it legal status, where, in accordance with Article 2 of the decree law, the fund is held under the auspices of the president.

The main purpose of the fund is to assist in the establishment of service and development projects, including: the financing of microenterprises; infrastructure projects; small projects for young people; the development of ashwa’yat, reducing the number of homeless and street children; and other projects that contribute to supporting the economic and social situation of the country.