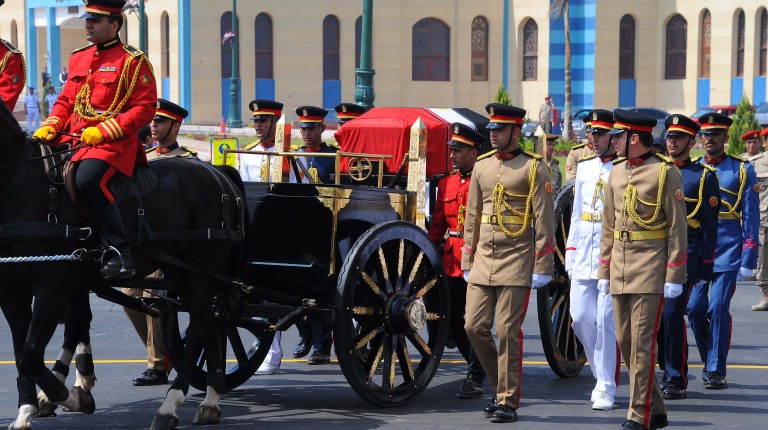 Wrapped in an Egyptian flag and surrounded by dozens of mourners accompanying him to his burial chamber in 6th of October City, Ahmed Zewail was bid a final farewell.

A military funeral was held on Sunday morning for the late Nobel prize winner. The funeral was attended by President Abdel Fattah Al-Sisi and top state officials, and held in New Cairo at the Hussein Tantawy mosque. The prime minister, ministers of defence and foreign affairs, the parliamentary speaker, and Al-Azhar Grand Imam were among the officials who paid tribute to the late scientist and offered their condolences to his family.

Another public funeral was held as the relatives, friends, and other citizens took the body of the California Institute of Technology professor to his final resting place.

Zewail passed away on Tuesday night after his health had deteriorated due to severe lung inflammation. As he had also been suffering from bone marrow cancer, he was unable to tolerate the inflammation. The femtochemist passed away in the United States; he had been planning to visit Egypt in mid-August.

Zewail won the Nobel prize in chemistry for his pioneering work in femtochemistry in 1999—he was the first Arab scientist to win a Nobel prize. Throughout his life, he was awarded many other prizes and was honoured for his contributions to science.