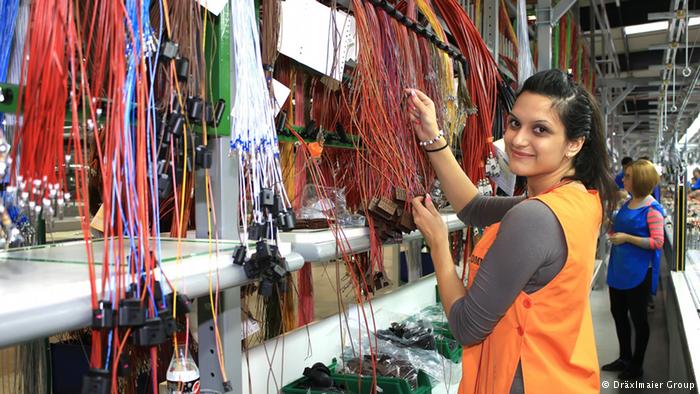 Macedonians who can find jobs are told to consider themselves lucky. But it’s unclear whether the luck is good or bad in a country where the minimal existing protections for workers are often blatantly ignored.
Thirty-five-year-old Goran gets on the bus before the sun comes up to travel 60 kilometers (35 miles) from his home in Veles to the production facility owned by the German company Dräxlmaier near Kavadarci, where he helps assemble electronic components for Mercedes – a brand he can’t afford. “I’m on my feet here all day long for 180 euros ($200) a month,” Goran said. “If you count weekends and holidays, it’s a little more. I can deal with it physically, but I am at the end of my rope psychologically. The pressure to fill my daily quota is killing me.”

Using an assumed name to avoid risking his job, Goran is one of the few workers who are willing to talk about working conditions in the factories owned by foreign investors in Macedonia. “We don’t want working conditions like those in Germany, but they should at least be nearly as good,” he said. “It is summer, and temperatures are often up around 35 degrees (95 F) – and we don’t have any air conditioning in the factory. I just hope that it won’t be like last year. It was hell: People were collapsing. Cutting costs that way is a catastrophe.”

Thousands of people in Macedonia share Goran’s working conditions. “I’m a single mother, and I have to stay here,” said an employee of the US company Johnson Controls, which produces automobile parts in Stip, in eastern Macedonia. “I don’t have any choice, but I am deteriorating psychologically. A controller is always looking over my shoulder, putting pressure on me, threatening to take away my quality bonus if I don’t fill my daily quota. And, believe me, that’s almost impossible.”

Unemployment has gone down in Macedonia over the past few years, but it remains at 25 percent. Half of those without work are younger than 29. And, even as the number of jobs has slowly increased, wages have steadily gone down. According to official statistics, average monthly earnings in Macedonia are about 350 euros. Yet about 70 percent of all workers in the country earn far less. In cities like Stip and Kavadarci, workers at such foreign companies as Dräxlmaier and Johnson Controls earn a monthly average of 250 euros, what employees in some EU countries earn for an eight-hour shift. And they often have to work much longer hours for it – including Saturdays and holidays.

With unemployment constantly threatening, many Macedonians are willing to do anything to get and keep a job. The nongovernmental organization Civil has reported that, through the end of 2015, at least five employees had died on the job at Dräxlmaier. The last registered case was that of a 50-year-old woman who died on the night shift in June 2015.

The Dräxlmaier Group claims that the working standards set by the company’s “Global Social Policy” are enforced at all of its facilities. “Dräxlmaier Macedonia operates according to international standards, especially in the area of working conditions,” company officials wrote in a statement to DW.

Macedonia’s government advertises the country as an investors’ paradise, touting the low wages in particular. But what is attractive to outside money often proves very bad for domestic workers. “We cannot expect to see higher wages as long as we continue to have high unemployment,” said Zoran Ivanovski, a professor at the South East European University in Tetovo. “That is the main problem of the Macedonian economy. Besides that, trade unions are too passive.”

Unions, most of which are under the direct control of the regime, claim that they alone are not to blame. “The real strategy of the government and its spokespeople around the world is: ‘Come to Macedonia where you will be able to take advantage of cheap labor,'” said Pece Ristevski, of the Trade Union of Industry, Energy and Mining of Macedonia. “That is how almost all of the foreign investors operate. Some even pay less than local companies.”

Ristevski said unions’ power had been stunted by laws intended to protect investors. On top of that is the pressure from foreign companies. While operating in countries outside of the European Union they are apparently no longer obliged to uphold EU working standards, Ristevski said. He added that unions are not active in many of the biggest companies. “For instance, we talked to hundreds of workers at Dräxlmaier,” Ristevski said, “but they have just given up.”

With an average increase in GDP of almost 3 percent annually, Macedonia has one of the fastest growing economies in the region. Statistics, however, show that Macedonians are among the poorest people in Europe, with an income average that is only 30 percent of that of EU nations. The World Bank predicts that Macedonia will need at least 30 years of continuous 4.5 percent income growth before it arrives at the European average.

That would be a very long time for Goran, who is confronted by his poverty and his misery every day. An eight-hour shift and several hours of commuting leave little time for his family. “It is stressful, but you have to survive,” Goran said. “I don’t have a choice.”

From Podgorica to Paris – Terror in the shadows