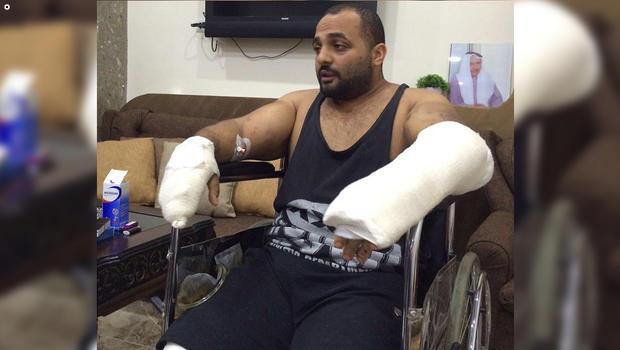 The Jordanian prosecutor general ordered a media gag on the case of an Egyptian man who was assaulted by a number of Jordanians last week.

The prosecutor said that the media gag was decided upon so as to secure the privacy of the investigations into the case. Any news or information about the facts or investigations on the case are prohibited from being published until its completion.

Ibrahim Darwish, 28, was an Egyptian national living in Jordan who worked as a security guard at a nightclub there.

Ten days prior the incident, a brawl took place in a restaurant between Darwish and a number of men working for a Jordanian business.

A day later, the men waited for Darwish, accosted him, and took him to a desert where they assaulted him causing severe fractures in his leg and hands. They left him unconscious at the side of a road, believing that he was dead.

Someone walking on the road notified the police when they saw the man. The police transferred Darwish to a hospital where he has undergone four surgeries so far.

The case was reported by media outlets following the release of an online video showing Darwish with his “arms and legs in casts and his face covered with welts”, according to state-run newspaper Al-Ahram.

The video triggered outrage across social media platforms with several Egyptian workers in Jordan commenting that this was not the first incident of its kind.

On Saturday, the Egyptian Ministry of Foreign Affairs released a statement confirming that it is following up on the case with its envoy in Jordan, and demanded that the suspects be arrested immediately.

The ministry stated that Darwish’s health has improved and that he has left the hospital, adding that officials are working hard to ensure he receives his rights.

In October 2015, an Egyptian worker was physically and verbally assaulted in Jordan by a Jordanian parliament member and other individual, according to an online video.

Then in November, Nasr Adel, an Egyptian national working Jordan, was found to have been shot in the head by Jordanian security forces. Prior to this, in the same month, two young Egyptians were stabbed during a dispute between them and five Jordanians in Irbid.

Foreigners, but friends of Egypt

Egyptians in Qatar: where to?