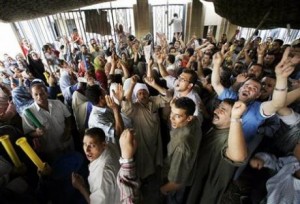 Owners and workers of several textile factories in Mahalla vowed to start an open-ended strike, threatening further escalation, in protest to a hike in textile prices.

A statement was released calling on the government and President Abdel Fattah Al-Sisi to counter the recent rise in textile prices. The rise in prices is attributed to the rise in the US dollar exchange rate in the informal market.

The statement read that the strike will begin on 10 August. The managers of textile factories said that dozens of workers and owners were suffering due to the lack of qualified calibers and the high price of raw materials.

Similarly, more than 750 owners of licensed companies and factories have threatened to start a strike in escalation, and stop paying insurance for their workers to the government. They pointed out that the number of workers in the factories exceeded 250,000, all of whom are facing the threat of unemployment due to the government’s negligence of them in the wake of the current economic turmoil, according to the statement.

The statement listed all the reasons as to why the textile industry had deteriorated, including smuggling, lack of qualified manpower, and unlicensed companies and factories.

Head of the Spinning and Weaving Companies coalition Ahmed Abou Ammo said that the smuggling of products through unofficial customs leads to the loss of customs fees.

In 2006, a group of Mahalla workers went on strike, asking for bonuses and better wages. The demands motivated workers in several other factories across Egypt to do the same. The 2006 strike is often seen as one of the major movements leading up to the 25 January Revolution.