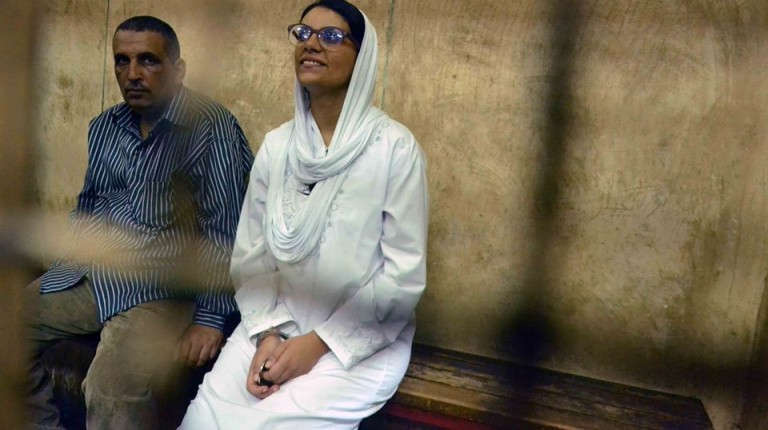 Lawyer Mahienour El-Massry and journalist Youssef Shaaban will begin release procedures on Thursday, after serving a 15-month prison sentence against the backdrop of a case dating back to the Muslim Brotherhood’s regime, also known as the ‘Raml police station’ case.

Local and international organisations have repeatedly called for the release of the two activists. The Press Syndicate, along with other groups, led a campaign in solidarity with Shaaban. Amnesty International also called for urgent action in November 2015, calling on Egyptian authorities to release the two prisoners of conscience, along with activist Loay El-Kahwagy.

According to the group’s lawyer Mohamed Ramadan, El-Massry, held in Al-Qanater female prison, should be transferred to the Raml police station and be released by Thursday.

As for Shaaban, he should be released from Borg El-Arab prison Thursday night, and be transferred to the Raml police station on the same day. He may have to wait until Saturday to complete the release clearance procedures, the lawyer told Daily News Egypt Wednesday.

Shabaan suffers from Hepatitis C. His wife Ranwa Youssef has been campaigning for her husband’s right to medical treatment as his health deteriorated in prison. On Tuesday, Ranwa wrote on her daily-updated Facebook page: “This is night number 431 of a total jail term of one year and three months. Less than two days left.”

With every post, Youssef has taken the opportunity to speak about other young prisoners of conscience and call for their release.

El-Massry and Shaaban, activists of the Revolutionary Socialists, were first sentenced to two years in prison in February 2015. Following an appeal in May of the same year, the verdict was reduced to one year and three months. They were charged with assaulting policemen.

In March 2013, pro-Muslim Brotherhood supporters assaulted the activists and drove them to the police station. Lawyers, including El-Massry, who went for assistance, were prevented from entering the station and were assaulted by police personnel inside. The lawyers were then arrested and accused of attempting to break into the police station.

Unfortunately, El-Kahwagy will remain in prison until March 2017, according to the lawyer. El-Kahwagy is serving another prison term in another case on protest charges.

El-Massry was part of the latter case but was granted a release in September 2014. The protest was a rally held by activists in December 2013 in front of a court during the trial of the police officer accused of the murder of Khaled Said─the infamous case that led to mass demonstrations on 25 January 2011.

After her return to prison, the award-winning lawyer did not rest much. She advocated the rights of her fellow inmates, and recently started a hunger strike demanding their rights to be visited in prison.

Meanwhile, among rights defenders in Alexandria is doctor Taher Mokhtar, who─despite being granted a release last week by prosecution─ was not released from prison yet. Mokhtar, a human rights activist member of the Doctors Syndicate, was detained with no charges last January.