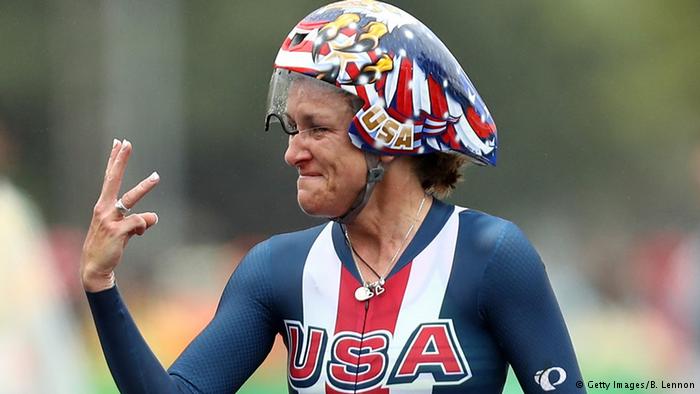 Zabelinskaya, who served an 18-month suspension for a banned stimulant and only got the green light to compete days before the Games began, set the quickest time before Armstrong belied her advanced years to put in an explosive late charge to clock a time of 44 minutes and 26.42 seconds the day before her 43rd birthday. Dutch rider Anna van der Breggen clinched the bronze.

Armstrong’s win broke her own record as the oldest Olympic cycling champion, beating the record she set four years earlier in London.

Armstrong, who suffered a nosebleed at one point in the race, initially retired from the saddle in 2009 to start a family before calling it a day once more after her win in London four years ago. But after three years out, and three hip surgeries, she decided to give it one more shot in Rio.

“It’s amazing, I don’t know if it has hit me yet,” she told reporters through tears after hugging her son and holding up a sign that said “USA STRONG”.

“This has been the most difficult journey. I took time off. The mind gets tired. So when I came back I was focused on Rio and it’s been difficult because I’ve had some poor performances over the last six months.”

Zabelinskaya, who finished third in the road race and time trial in London, also cried at the end after believing her time would be quick enough to claim gold this time around.

Cancellara proves he can

In the men’s race, Switzerland’s Fabian Cancellara was equally emotional as he clinched his second Olympic gold later on Wednesday. He won the same event in 2008.

“There a just no words. Finishing after 16 years with a double gold: it’s not bad,” Cancellara said after collecting his medal.

As in the women’s race, conditions were tough but Cancellara took 1 hour 12 minutes and 15.42 seconds to complete the 54.5-kilometre distance, a massive 47.41 seconds ahead of Dumoulin.

An Olympic marriage proposal: ‘I wanted to show people that love wins’