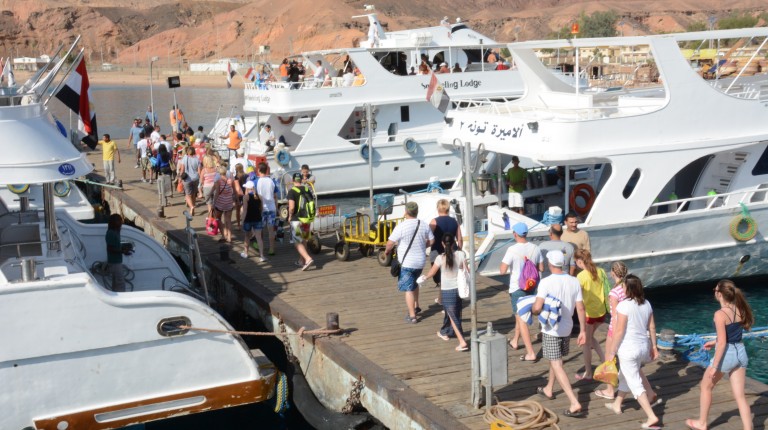 The improved flow of Egyptian individuals and families to tourist towns and resorts has pushed occupancies in Sharm El-Sheikh up to more than 40% during the second week of August.

Workers in tourism expect occupancy to continue growing with Egyptian families travelling during the summer season until the beginning of the new academic year in mid-September.

Hisham Ali, chairperson of the Tourism Investors Association in South Sinai, said that throughout the past two months, hotels have made offers for families in order to attract them to spend their summer vacations in Sharm El-Sheikh and other tourist areas in the governorate.

In response to some resorts’ negative reactions towards the idea of Egyptians staying in Egyptian hotels and resorts, Ali said that whoever does not want Egyptians there can shut down their hotels without senselessly talking about the issue. The presence of Egyptians there is actually protecting hotels from the tourist recession.

He believes that if it were not for domestic occupancies over the past period, the number of hotels needing to shut down would have increased significantly, especially considering the conditions of the sector from November.

Russia suspended all trips to tourist areas in Egypt following the incident of the Petrojet aeroplane. Britain suspended all its trips to Sharm El-Sheikh only.

Egypt’s tourism income declined during the first half of 2016 down to EGP 1bn, losing 80% of revenues compared to the same period in 2015.

South Sinai has 65,000 hotel rooms of a total 225,000 operational rooms in Egypt. The rest are distributed across Red Sea governorates, Greater Cairo, and the southern region of Upper Egypt.

Ali said that British owned residency units in Sharm El-Sheikh have contributed to increased visit rates. The number of Russians visiting Egypt has also increased over the past five years, making Russian tourists one of the largest populations visiting Egypt.

Adela Raga, economic consultant of the tourism minister, said that tourist programmes supported by the Tourism Ministry have significantly contributed to increasing occupancies in some tourist areas. The ministry supported trips to Luxor and Aswan worth EGP 500 per seat at the beginning of the programme. Right now the ministry seeks to increase occupancies in the area.

The Ministry of Tourism is now supporting tourism programmes in Hurghada and Sharm El-Shiekh. These programmes will continue until the end of summer, said Ragab.

Head of the Tourism Investors Association in Nuweiba and Taba, Sami Soliman, requested to include the area among the tourism marketing programmes that the ministry launches, especially since many hotels have closed their doors.

“These marketing programmes should not be limited to Hurghada and Sharm El-Sheikh only,” said Soliman, adding that Egyptians visiting these hotels during the holidays is protecting investments now worth more than EGP 15bn.

The occupancy rates in Nuweiba and Taba currently range between 10% and 15% in the hotels that are still operational, according to Soliman, adding that the average prices range between EGP 200 and 400 for one person per night, which is a suitable price for many Egyptians.

The tourism programmes in the area, according to Soliman, are different than those in the rest of Sinai. They include safari trips in various valleys and diving in coral reefs.

Board member of the Egyptian Travel Agencies Association, Moody El-Shaer, said that the next period will see strong marketing programmes in East and Central European markets, especially since the World Travel Market (WTM) exhibition will be held in London in early November. In addition to this there are other exhibitions will be held during September and October in Italy and Russia.

Hotel revenues per available room forecasted to grow by 8% between December, February in Cairo: Colliers