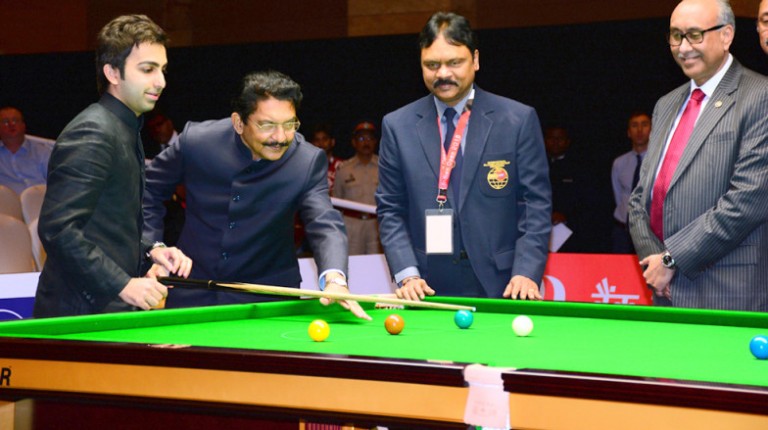 Given Egypt’s uncertain political and economic situation, the tourism industry has been suffering greatly over the past few years. The government along with various entities and institutions are endeavouring to host events that would attract tourists and portray the country as a safe, entertaining haven.

One of those events was the 2016 International Billiards and Snooker Federation (IBSF) World Six Reds and Team Snooker Championship, which took place in Sharm El-Sheikh. The championship was attended by a number of international players and spectators from 27 countries at one of Egypt’s tourism hotspots.

Daily News Egypt met IBSF president PVK Mohan from India to discuss the status of the sport worldwide and the federation’s plans to increase the number of female snooker players and championships.

When were you elected to be the IBSF president?

I was elected in 2014. Since then it has been a wonderful journey.

What were the highlights of this journey so far?

As a new board, we were able to introduce several new championships. The tournaments I am most satisfied with are the World Under-18 and Under-21 Championship, which was introduced for the first time in Russia in 2015.

It was a big success. This year it is taking place in Mol, Belgium.  The under-18 division will take place from 16 to 20 August and the under-21 division from 20 to 25 August. Having seen its success, about 230 players are entering this year’s tournament.

Which is the most successful country in snooker?

I can see that Asia in general is coming up very fast. China, for instance, is doing extremely well. It is closely followed by countries in the Middle East, as well as India and Thailand. All these countries are strongly developing and bringing about champions that are challenging the traditional snooker players from the United Kingdom.

Which countries in the Middle East are rising significantly in snooker?

Qatar, the United Arab Emirates, Bahrain, and several talented players are also coming from Palestine and Iraq. Snooker is spreading all over the Middle East.

Bringing all countries together to play the sport is one of the main successes of the IBSF. We are glad to see that several new countries are joining.

Which countries most recently joined the IBSF?

The countries that recently joined include Kazakhstan, Albania, Kyrgyzstan, Brunei, and Mozambique. A great example is Albania, which has been closely following the progress of snooker tournaments played in the so-called ‘eastern Europe’. This year, the country is joining the World Under-18 and Under-21 Championship.

Eastern European countries have been hosting many significant international snooker championships recently, such as Latvia. Can you tell us why?

It all depends on what the federations in these countries are offering. The country’s federation has to provide good sponsorship and support that enables it to host a tournament.

So what is the Latvian Republic Billiards Federation doing to host these tournaments?

They are providing good leadership and good sponsors.

For any tournament to be successful, regardless where it is taking place, you need to have good sponsors and supporters who can make things happen.

Many Indian players participated in the 2016 IBSF World Six Reds and Team Snooker Championship. In this regard, can you tell us about the status of snooker in India?

Snooker is very successful in India. Whether on the national or international level, many tournaments have been played in India, including tournaments for professional players.

In India, we are supported well by governmental and private sector sponsors. Additionally, we have good support from the media. This is why a lot of players in India are taking to the sport. Now we have even introduced the sport in schools and colleges.

We also have many women playing now, and a lot of young girls are also emerging as players, which I consider to be a good sign.

What about snooker in Iran? Is it popular?

Iran is similar to India in that the country has several role models for the younger players who are starting to rise up the ranks. Several players from there showed a great performance in the IBSF tournaments, and many Iranians are pursuing the sport professionally.

What are the challenges that are facing the sport’s development in Egypt?

Egypt has been doing well and has been hosting world championships consistently. However, better sponsorship and governmental support are needed.

When a country hosts a tournament, how does that affect the development of the sport in that country?

It creates national awareness of the sport and helps spread it there, as people watch and follow it in the media. People start to take interest in the sport.

What are your future plans to develop the sport among women?

We have extensive plans in this regard. In 2017, we are planning to have four major tournaments for women in different countries.

There are only one or two tournaments for female players a year. We plan to raise this to a minimum of four annual tournaments.

Can you briefly summarise the 2016 IBSF World Six Reds and Team Snooker Championship?

Such a massive tournament took a lot of effort and courage from the Egyptian Federation of Billiards and Snooker (EFBS), presided by Mohamed Kammah, bearing Egypt’s current political situation in mind.

Many European countries are concerned about coming to Egypt. In spite of that, 27 countries have participated in this championship. We hope that the EFBS’s determination will help increase this number in next year’s tournament.

Such tournaments can help the tourism industry in Egypt. Do not forget that players and delegations from these 27 nations are ambassadors for their countries. They will return home and talk to the people there about their experience, as well as to their governments about Egypt. Players in the IBSF tournament are approved and sent by their governments, so they provide feedback upon their return.