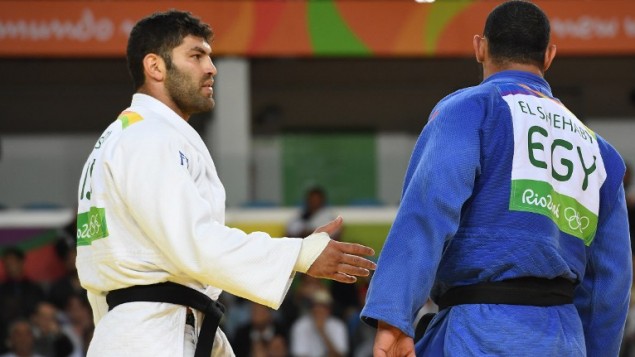 The Egyptian Olympic Committee had stressed to Egyptian judoka Islam Al-Shehaby that he must adhere to the rules during the match with his Israeli opponent, and that Al-Shehaby’s behaviour was a “personal act”, according to a statement released Friday.

Al-Shehaby refused to shake hands with his Israeli opponent after the latter defeated him in the men’s 100kg division. The committee said that it is “just a game” in an international competition.

Spokesperson for the Israeli prime minister, Ofir Gendelman, said in an unofficial statement on Friday that what Al-Shehaby did was an explicit violation of the Olympics’ rules, adding that this incident came after two previous ones.

The first incident was when the Lebanese Olympic delegation stopped the Israelis from joining them on the bus. In a second incident, a Saudi judoka claimed that she injured her arm and leg to avoid confronting her Israeli opponent.

Gendelman added that what Al-Shehaby did is “unacceptable”. Arab athletes are the only ones who refuse to compete with athletes from other countries, he said, describing them as “extremists, inciters, and discriminators”.

The spokesperson concluded by saying that Arabs should not attribute Israel’s actions to the Palestinian conflict, which, apparently, could have been solved 20 years ago if Palestinian leaders had wanted this and if there were no terrorist groups in Palestine.

Al-Shehaby was booed at by the audience following his controversial move, as he breached a traditional judo routine. He faced severe backlash when he decided to play the match after several calls for his withdrawal. He was accused of normalising relations with Israel and of being a traitor.

International media outlets described what Al-Shehaby did as “unethical and lacking flexibility”. They also described those who called on him to withdraw from the match as affiliated to radical Islamic groups.

The international Olympic committee summoned Al-Shehaby following the match to investigate the incident. The spokesperson said the committee is not available for comment on the matter until after investigations.

Al-Shehaby was allegedly threatened to be eliminated from the International Judo Federation if he refrained from participating in the match.