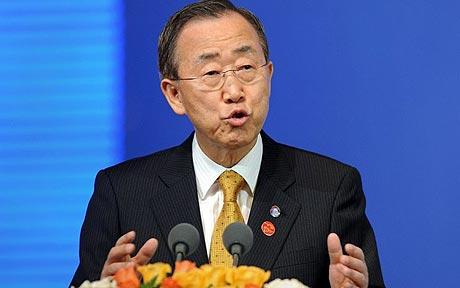 The United Nations (UN) on Saturday denied statements attributed to its secretary general Ban Ki-moon, in which he allegedly called for an investigation into the killing of hundreds during the  Rabaa Al-Adaweya sit-in dispersal.

“The United Nations in Egypt denies the issuance of any statements today or yesterday regarding Egyptian affairs by the UN secretary general Ban Ki-moon, as was claimed in the media,” a statement read.

On Saturday, the spokesperson for the UN secretary general was quoted by Turkish Anadolu news agency saying that Ban “believes it is very important to conduct a full investigation into the killing of hundreds of civilians during the dispersal of Rabaa Al-Adaweya square’s sit-in on 14 August 2013.”

The UN in Egypt called upon all media sources to be accurate in citing any information or data related to the United Nations.