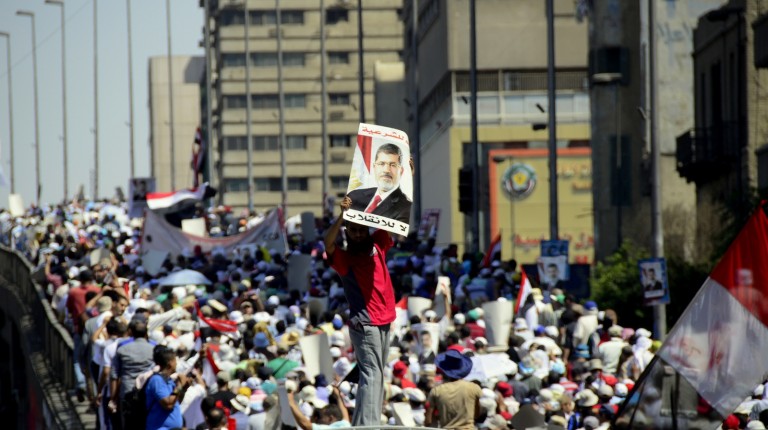 As the third anniversary of the violent dispersal of pro-Mohamed Morsi sit-ins passed quietly without protests or any commemoration events in the streets of Egypt, the currently outlawed Muslim Brotherhood maintained in several statements by its leaders that it will continue its “peaceful revolutionary mobalisation”.

Mahmoud Ezzat, the current deputy supreme guide of the Brotherhood, which lost hundreds of its supporters in the deadly dispersal of the Rabaa Al-Adaweya and Al-Nahda encampments on 14 August 2013, said that “sacrifices will continue until the people achieve their consciousness and gather around its revolutions to confront the counter revolutionaries.”

Ezzat said that the Arab Spring was a civilised, peaceful movement but was plotted against by “imperialist forces that incited sectarianism and supported tyrants and military coups, and stood silent about human rights violations… which resulted in the death of peaceful revolutionaries.”

The statement, which was published on Sunday, cited Turkey and Tunisia as successful examples of the “Islamic Ummah”.

In Egypt, Ezzat said that “peaceful resistance” continues and described it as “the key saving Egypt from a destructive explosion”.

The Brotherhood faced a violent crackdown following the military led ouster of Islamist president Mohamed Morsi. Many of the group’s members and leaders are facing harsh prison sentences in cases related to terrorism charges, are wanted by the regime, or were killed in clashes with security forces.

The Brotherhood has been accused by the state and public opinion of forming militant groups throughout the country, which have been charged with recent acts of violence, assassination attempts, and bombings, most of which have targeted state institutions and police forces. The group, nevertheless, has consistently rejected these accusations, arguing that “they will never abandon their peaceful protesting tactics”.

However, this all challenged after Ahmed El-Mogheer, a former senior member in the group’s youth sector, wrote in a post published on the anniversary of the dispersal that the “sit-ins were armed” with AK-47s, birdshots, Molotov cocktails, and hand grenades.

El-Mogheer, who is wanted by Egyptian security forces in many cases and whose whereabouts is unknown, talked about the “Tiba Mall Brigade”.

Tiba Mall was one of the entrances to Rabaa Al-Adaweya square where concentrations of the protesters, usually young males with sticks and helmets, staged patrols to secure the sit-in.

But, El-Mogheer argued: “Rabaa was full of weapons, enough to back off the army and the police.” He hinted that one upper ranking member ordered the weapons to be evacuated, adding that the youth considered this to be treason.

El-Mogheer added that the Tiba Mall entrance was known to be the destination of young Jihadists who “refused democracy, parties, and plurality”.

The post, which was removed by El-Mogheer, mentioned that the young people, armed with machine guns and birdshots, fired back at the army.

According to the security and state’s narrative in the aftermath of the dispersal, around 15 rifles and birdshots were found, as well as dozens of motorcycle helmets and shields.

The post was widely shared and reported on by pro-military supporters and the media, who asserted that this is “an eyewitness from the Brotherhood who confirmed the militancy of the sit-in”. Others used the statements to justify the killings.

However, a source in the Muslim Brotherhood, who preferred to remain anonymous, said that the statements are “absurd” and “contradict the truth”. “If the revolutionaries were armed, the number of casualties wouldn’t have been so high,” said the source.

Another member of the ultraconservative Salafist Front said that El-Mogheer was not a leading figure in the sit-in, adding: “he barely entered the sit-in’s headquarters where all the decision makers were based.”

Hours before El-Mogeer’s controversial testimony, the Muslim Brotherhood released a general statement saying: “the anniversary of the massacre is not a Karbalai event where we weep every year, but we commemorate every day, by working hard to foil the coup.”