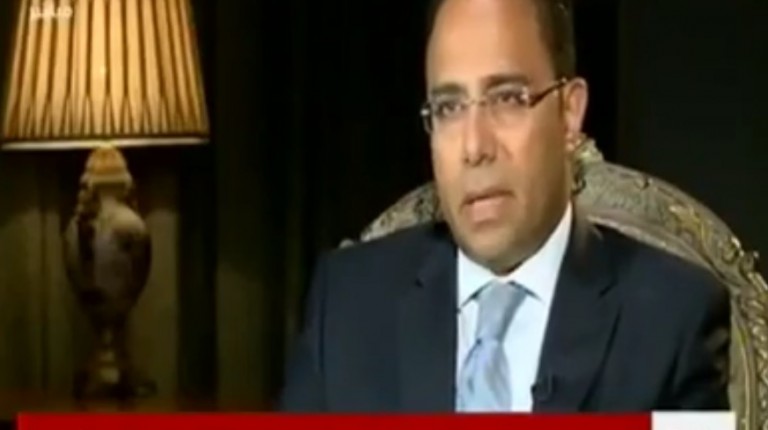 Foreign Ministry spokesperson Ahmed Abou Zaid discussed several regional problems and the ongoing political turmoil across many Arab countries in an interview with the privately-owned channel CBC on Sunday.

During the interview, Abou Zaid touched upon the tension in Egyptian-Turkish bilateral relations, the Israel-Palestine conflict, as well as the unrest in Syria, Libya, and Yemen. He also discussed the state’s stance on the controversial The Economist article, which weighed in on the status of the country’s economy.

Turkey’s comments and statements about Egypt have been on the rise, Abou Zaid said. Following the failed coup in July, Turkey has been trying to improve its foreign relations with other countries, particularly those countries with whom it has unstable relations.

This was in response to Turkish foreign minister Mevlut Cavusoglu’s recent statement in which he said Turkey is ready to foster ties with Egypt and that the country wants to see a stronger Egypt in the region. He, however, condemned the increasing number of death sentences in Egypt.

Abou Zaid added: “Bilateral relations between Egypt and Turkey have been tense following the 30 June Revolution. Turkey has persisted in commenting on the political situation in Egypt. However, there are several conditions that should be followed if Turkey truly intends to improve its relations with Egypt. Turkey must stop intervening in Egypt’s internal affairs, and also should “respect the Egyptians’ will that pushed the ouster of the former president and chose to elect the current president and parliament”.

If there is a true intention to improve bilateral relations, then Turkey must respect the Egyptians’ will, instead of speaking as if they have some sort of guardianship over Egypt, the spokesperson said.

Turkey is currently attempting to improve its regional and international relations, as seen when Turkish president Recep Tayipp Erdogan recently visited Russia amid tension between the two countries over Turkey’s shooting down of a Russian warplane in November 2015. However, Abou Zaid said, Turkey’s attempts will not be sufficient unless Turkey decides to refrain from its comments on Egypt.

Abou Zaid rebutted any regional or international mediation from other countries to solve the tension between Egypt and Turkey.

Abou Zaid said that the status of the Palestinian conflict currently is a sensitive and critical one, as it has been for a while. The president’s statement a few months ago helped the situation, yet the Palestinian people are still suffering and there should be serious steps taken towards a political solution, he added.

President Abdel Fattah Al-Sisi previously said in a statement that if we want stronger and “warmer” relations with Israel, then the Palestinian conflict should be solved first. Foreign Minister Sameh Shoukry has made initial talks with both Palestine and Israel to understand the conditions upon which a solution to the dispute can be reached, according to Abou Zaid.

He also said that there are two main elements that should be available in abundance to solve the conflict: firstly, political will and realisation of the importance of peace in the region, and secondly, regional and international support.

Abou Zaid stressed that while there should be a prompt solution for the political turmoil in Syria, there is no military solution to the situation in Syria. Combating terrorism in Syria is a priority, he said.

He said that all parties in dispute in Syria should conduct negotiations to reach a solution, adding that the only ones benefiting from the current situation are the terrorists.

Despite Egypt’s indiscreet support of Libyan Armed Forces commander Khalifa Haftar, Abou Zaid said that Egypt supports the peace agreement that was signed in December 2015 between the different political factions in Libya. The Libyan army must be supported in its war against terrorism, he asserted.

He added that the Libyan Parliament should support and provide the government with legitimacy, and the different factions should reach a solution without looking to their personal interests.

Abou Zeid said that Egypt has warned against travelling to Libya several times, labelling it as an unsafe zone, and any speculations that the situation in Libya is safe are misguided. He said that those who travel to Libya now are jeopardising their lives.

Regarding the tension in Yemen, Abou Zaid said that the different factions were about to reach a solution following intervention by the United Nations, however, the Houthis just announced that they will establish a presidency council, which was a major disappointment as it implied that they are far from settling the dispute.

The recent visit by the Yemeni prime minister to Egypt was to discuss how Egypt can aid Yemen in settling its dispute, as Egypt is a part of the Arab coalition that supports the legitimacy of Yemeni president Abd Rabo Mansour Hadi.

He added that the Foreign Ministry had to respond to this article and clarify some of its points, due to the negligence of the publication to mention several of Egypt’s achievements and their selective reporting and shallow analysis.

He said Al-Sisi’s latest speech had explicitly discussed all the economic issues and challenges facing Egypt, but he also stressed that there has been notable progress, especially in the field of infrastructure.

The Turkish coup and the mania of cockfighting fans in Egypt