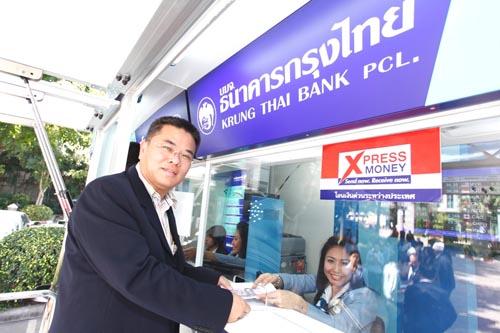 The World Bank has released figures showing that Egypt is the country that receives the highest amount of remittances in the MENA region. In 2015, the country received an estimated $19.7bn in remittances from around the world, of which $1.83bn was received from Egyptians residing in the UAE.

Remittances play an important role in the Egyptian economy, contributing to 6.8% of the country’s GDP in 2014.

Xpress Money is one of the fastest growing money transfer brands in the world with a thriving presence in every continent. Established in 1999 in the United Kingdom, the brand has grown by leaps and bounds and has spread its geographical presence across 160 countries over the last 16 years.

It offers a variety of services to address customers in both evolved and evolving remittance markets. The company services cash to cash, cash to bank account, cash to mobile, social money transfer app, cash to card or ATM, and door delivery service.

Remittances to Egypt are expected to stay high as the UAE moves towards hosting global events such as the Expo2020 world exhibition, which will attract 25 million visitors and generate employment opportunities for Egyptian nationals, according to Sudhesh Giriyan,  the COO of Xpress Money (XM).

Daily News Egypt talked to Giriyan to discuss the services that the company provides for Egyptians in the UAE.

Could you summarise Xpress Money‘s business?

We are one of the top five international money transfer brands in the world. We are a global company and operate in 150 countries with 180,000 agent locations. We do not only operate in the UAE, but also throughout the whole Middle East, including Jordan, Lebanon, Egypt, a few countries in Europe, North America, Latin America, Africa, the Pacific, and Russia.

What services does the company provide for Egyptians that other companies do not?

A 2015 BQ Magazine report estimates that 400,000 Egyptians reside in the UAE, making them the largest Arab expatriate community in the country.

Egypt’s remittances come mostly from Saudi Arabia, followed by the UAE, Qatar, Oman, Kuwait, and Bahrain.  Egypt is a receiving country. It is listed as number six in the world in terms of receiving remittances, following India, China, the Philippines, Mexico, and Nigeria, respectively. Egypt is the largest recipient in the Arab world, while the largest sender is Saudi Arabia. There is a large Egyptian community in Saudi Arabia.

Regarding the services we provide, they are similar to those of most money transfer companies; we do cash remittances and send money to accounts, but as far as customer fees and rates, we stand out from our competitors who operate with us across the globe as we offer very competitive fees.

Besides this, we have also launched a loyalty programme, which means that the customer gets certain benefits for every transaction completed through us.

We also have a referral programme. Let’s say an Egyptian here referred another Egyptian to us; for every transaction of this new customer, the one who referred him gets AED 1 equivalent. This is a very comprehensive loyalty programme.

Now everybody, including all the Egyptians in these countries, benefits from this programme. Xpress Money doesn’t charge any back-end fee, which means that whenever a transaction goes from this part of the world whether from the UAE, Qatar, Bahrain, or Kuwait to wherever we operate, we charge just once, we do not charge on the receiving side.

Also, let’s say an Egyptian sending money to Egypt comes back after 10-15 minutes and says I want to cancel my transaction. We give the entire amount back including the fees. Many of our competitors wouldn’t give back the fees, they would just give back the principal amount.

Moreover, whenever the transaction has been picked up and the amount has been collected by the beneficiary the remitter gets a message confirming that his beneficiary has received the cash. Therefore, after all it is always an advantage to do your transactions with XM.

How many clients are served by the company?

We offer very attractive customer rates; thus, the company serves over 13.2 million customers every year. Clients can send money via our company to 160 countries.

What currencies does the company permit for Egyptian remittances?

We allow both US dollar and Egyptian pound transfer. Therefore, a customer, who for example has to send money, has the option to send it in Egyptian pounds or in US dollars. This is the case for the Egyptian market; since we operate in many countries, we also send money in many currencies according to the country to which we are sending the money.

What banks does the company cooperate with? What is the state of the company’s investments in Egypt?

What is the value of the transfer fees levied on the amounts to be remitted?

The fees vary from market to market. If the transaction is sent from the UAE, we charge AED 15, which is equivalent to $4.

Do you think the devaluation of the Egyptian pound against the US dollar and the shortage in foreign currency will affect remittances?

We have not seen any negative impact. On the contrary, we have seen a growth in remittances.

If the company services online remittances, do you have any concerns about the small number of Egyptians who pay electronically?

It is an emergent trend. If you look at the situation across the globe today, the estimate is that people sending remittances digitally account for 6% of the global volume, so 94% are still going to the agent to send remittances.

Egyptians’ behaviour is no different from the global behaviour. This is all evolving I think in the next 10-15 years. Things are going to change completely, as will the customer’s behaviour.

The number of Egyptians doing money transfer using an online application is very small, but that is likely to change in the future. This requires customer education, which is something we constantly do. We educate the customer in terms of the convenience of digital transfers. For example, customers don’t have to travel miles to send money home; they can do a transfer sitting comfortably in their home or office. This alone is a huge benefit.

All the money transfer operators who are now online are constantly giving some incentive for using these services. For example, we just launched online money transfer from the UK and we are not charging any fees at all. These attractive rates are incentives for the customer. It’s a win-win situation: he can do his money transfer from his home or office without going to the transfer centre, and he won’t have to pay any fees.

Mobile transactions originate from the UK. The moment the transaction is initiated and we receive the customer’s funds, in most of the countries, the money is available the next minute.

Mobile transactions provided by the company are only available in the UK for now, but soon they will be available in other countries also.

When will the company launch the mobile transaction app for other countries?

We have a plan to launch it during the first half of the next year.

How do you guarantee low-risk services for online remittances?

Our systems are very secure. Before we launch such a product, we launch several rounds of technical tests to make sure that no one is able to infiltrate the system.

How large is the company’s presence in Africa?

We serve close to 30 countries in Africa. The countries of operations are found throughout the continent.

Does the company plan to expand in Africa or the Middle East?

We will certainly be looking at that. Our plan is to be in every country by the end of 2017. We are well covered in the Middle East. We aim to cover the countries that are still far from our business by the end of next year.

US dollar jumps to EGP 8.87 on official market, EGP 11 on informal market during Al-Sisi’s 2-year presidency