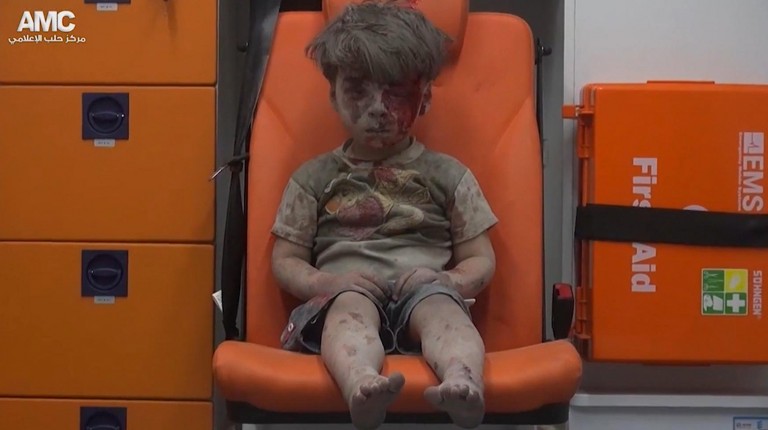 Covered in dust from head to toe after being pulled from the rubble caused by an airstrike, a young boy sits dazed and bewildered in the back of an ambulance. The survivor of the airstrike in Aleppo on Wednesday has been identified by Syrian doctors as five-year-old Omran Daqneesh.

The photograph is a still taken from a clip posted by the Aleppo Media Center on YouTube late on Wednesday.

The footage shows young Omran being rescued from the wreckage in Aleppo’s Qaterji neighborhood before being taken to the ambulance.

Within hours of being posted on Twitter, the startling image has been shared tens of thousands of times, prompting a huge response across social-media platforms.

President and CEO of the International Rescue Committeee David Miliband tweeted: “The stunned, bloodied face of a child survivor sums up the horror of Aleppo.”

Another user, Lieke, tweeted: “Omran, we are so sorry.”

Journalist Anna Ahronheim wrote: “His name is Omran. He is 5yr old. He has known NOTHING but war his ENTIRE life. Imagine he was YOUR child.”

Aleppo has been in a state of siege since government forces, led by President Bashar al-Assad, closed in on the Castello Road, the last route into rebel-held areas of the city. The road was severed nearly a month ago, sparking food shortages and sending prices skyrocketing in the eastern districts.

But in a major push earlier in August, a coalition of rebels, Islamists and jihadists fighting against government-led forces cut off the regime’s own main access road on the southern edges of the city, leaving millions of civilians trapped without electricity or water.

German Foreign Minister Frank-Walter Steinmeier slammed the move, saying that the three-hour window did not provide enough time for the necessary aid to be transported into the city. Echoing calls made by the United Nations (UN), Steinmeier demanded a complete ceasefire.

More than 290,000 people have been killed since Syria’s conflict erupted in March 2011. Millions have been displaced leading to a refugee crisis across the region and into Europe.