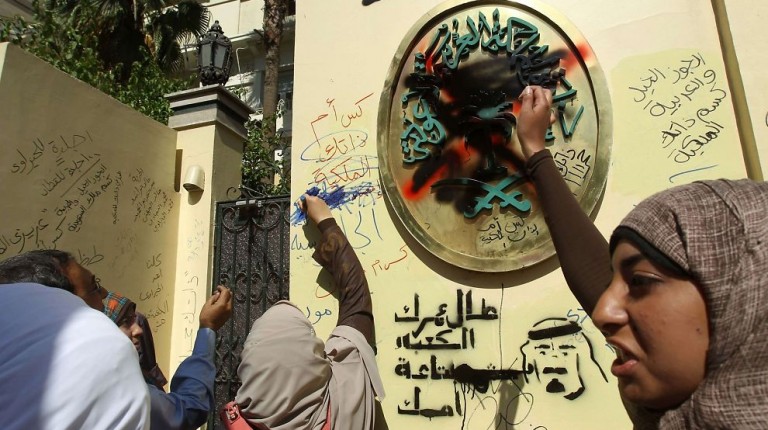 Due to poor economic conditions in Egypt, millions of citizens have elected to leave the country, seeking jobs and salaries elsewhere that will provide them with the basic standards of a decent life.

Nearly 10 million Egyptian citizens have left their country seeking employment. Though they move to different parts of the world, a huge proportion of these migrants are based in the Arab Gulf countries, which host nearly 4.5 million Egyptians, according to recent statistics from the Egyptian Expats Union.

Despite recent economic deterioration that continues to take place in some Arab Gulf countries resulting in delayed salaries and labour liquidation, a number of Egyptian expats prefer to stay.

Incidents include assault, murder, and imprisonment for trivial reasons. Moreover, prominent officials and figures in these countries display racist attitudes towards foreign expats in general through written articles and media statements that belittle their efforts and existence, despite the important role played by expats in developing and building these countries.

Through this report Daily News Egypt highlights a number of incidents, which include harassment, murder, and assault, in Saudi Arabia and Kuwait.

This report includes testimonies of expats who were subject to harassment or racist treatment in these countries.

Saudi Arabia appeared during the 1970s as an attractive destination for Egyptian labourers, teachers, doctors, and other professionals, because, resulting from its high reserves of oil, it provided high salaries.

Nearly 2 million Egyptians are now based in Saudi Arabia working in both the public and private sectors. These workers are subject to the kafala system.

The kafala system involves sponsorship for foreign workers; however, this puts workers at the mercy of their employers.

“Years pass, and still the system exists. We are suffering from a system of ‘slavery’ that enables the employer to refuse us permission to leave the country. He can also through this system cancel residence permits. The system deprives workers from changing employers,” Egyptian English teacher based in Saudi Arabia Mahmoud Ali told Daily News Egypt.

Ali asserted that the kafala system is unreasonable and considered a form of “bondage”, but he and other Egyptian expats are forced to adapt to these conditions due to the poor economic status in Egypt.

Moreover, the Saudi government does not allow expats to enrol their children in state-owned universities based in the kingdom. This creates a state of “dispersal” in the family, as part of a family is forced to leave the country to study, according to Ali.

In 2004, a report issued by the Human Rights Watch organisation highlighted the maltreatment foreign workers are subjected to in Saudi Arabia, including assaults and trials that conclude with execution or beheading without informing the expat’s home-country’s government.

Several Egyptians in Saudi Arabia were recently subjected to similar incidents. The following incidents are the most prominent.

Egyptian killed in a traffic skirmish

In February, footage circulated showed an Egyptian citizen who was run over by a car in Saudi Arabia. The footage was met with great outrage through social media outlets. The Saudi police issued a statement through which it asserted that three Saudi citizens ran over the Egyptian expat due to a disagreement and declared that they had arrested the perpetrators.

In January, footage circulated through social media outlets showed a Saudi police officer assaulting an Egyptian expat. Reasons for the assault were not made clear. The assault was believed to be in the holy city of Mecca.

Another video that circulated on social media outlets showed a Saudi citizen using a stick to assault an Egyptian expat, smashing the glass of the expat’s car. In the footage, a women who was accompanying the Egyptian expat starts to scream. The reason for the assault is believed to be a traffic skirmish.

“I hope that the Saudi government will treat expats exactly as Western governments do. We are suffering under the kafala system. Personally I was not subjected to racist incidents, but the system treated us as ‘slaves’,” former Egyptian accountant in Saudi Arabia Mahmoud El Sony told Daily News Egypt.

El Sony noted that the kafala system allows the employer to interfere in the personal life of the employee.

“You have to first get permission from the kafeel [employer] before you can consider marrying,” he clarified.

In 2012, Abdel Rahim Sayed, a 57-year-old Egyptian worker in Saudi Arabia, was shot while walking in the street by a number of his young Saudi neighbours.

Kuwait is no better

As an appealing destination for Egyptian expats before Saudi Arabia, Kuwait became popular in the 1960s as a country that was aiming to establish a coherent infrastructure and education system. For the sake of this goal, the nation employed many Egyptians who actively contributed to the establishment the nation now enjoys.

The number of Egyptian expats in Kuwait is 700,000 according to Kuwaiti newspaper El-Watan. Despite this huge ratio, several incidents of racism against Egyptians and other expats have been recorded.

In 2015, in a televised interview with a Kuwaiti state–run channel, a high-ranking official in the Kuwaiti ministry of interior made racist statements against expats in the country.

The footage was heavily circulated across social media and aroused great uproar among resident expats in Kuwait who found El Grah’s statements offensive and hurtful.

Also in 2015, 25-year-old Egyptian expat Ahmed Atef was killed while two Egyptian nationals and one Kuwaiti citizen were seriously injured as a result of a fight between Egyptian workers and two Kuwaiti citizens in an electronics shop in Rehab Mall in Kuwait.

The fight broke out between a group of Kuwaitis and Egyptian worker Mohamed Amin when they disagreed over the set price of a PlayStation game console. The two Kuwaitis wanted to buy the console at half its price, but Amin refused. They then reportedly began insulting him, and Amin asked them to leave the shop.

In June of this year the Kuwaiti criminal court sentenced a Kuwaiti man to life in prison for the murder of Egyptian expatriate, Ahmed Atef.

In May, not long after the aforementioned case, an Egyptian expat was attacked in Kuwait. A video surfaced of Egyptian expatriate Ashraf Abou El-Yameen being stripped down and assaulted by a Kuwaiti citizen.

After the footage went viral, Egypt’s Foreign Ministry issued a statement highlighting their confidence in Kuwaiti authorities, maintaining that Egyptians’ safety and dignity is their top priority.

El-Yameen was summoned by Kuwaiti authorities to begin investigations into the incident. A verdict is yet to be announced.

The Egyptian state recently showed remarkable efforts to follow up on some of the aforementioned cases, but there are still unsolved cases of Egyptians being subjected to detention without charges due to disputes with their kafeel, according to testimonies of families who speak on the condition of anonymity lest authorities there harm their relatives.

Egyptian expat claims he was tortured by Sudanese intelligence

Video of Egyptian assaulted in Kuwait leads to another uproar

Egyptian citizen run over, killed in car accident in Riyadh