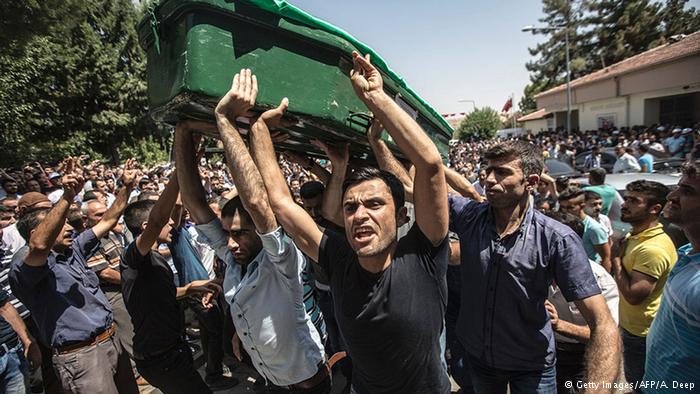 Turkish President Erdogan has said the suicide bomber who attacked a wedding party in southeastern Turkey was a child as young as 12 years old. More than 50 people were killed in the blast – Turkey’s deadliest this year.
Turkish President Recep Tayyip Erdogan said Sunday that the explosion in the city of Gaziantep was carried out by a bomber “aged between 12 and 14.”

Speaking live on national television, he also blamed the carnage on the “Islamic State” (IS) militant group, which controls large swathes of territory in neighboring Syria.

“Initial evidence suggests it was a Daesh attack,” Erdogan said, using an alternative acronym for IS. It was clear the group “had such an organization in Gaziantep or was attempting to make room for itself in recent times,” he added.

No one has yet claimed responsibility for the blast that went off among guests dancing at an outdoor Kurdish wedding party late Saturday. At least 51 people were killed and 94 wounded, Erdogan said. Around 70 victims were still in hospital, with 17 in a critical condition.

In Gaziantep, the chief prosecutor’s office said they had found a destroyed suicide vest at the blast site. Turkish authorities sealed off the area and issued a media blackout on coverage of the attack until their investigation is completed.

Turkish Prime Minister Binali Yildirim condemned the bombing, which he said turned “a wedding party into a place of mourning.”

Deputy Prime Minister Mehmet Simsek visited the wounded in hospital on Sunday, describing the attack as a “massacre of unprecedented cruelty and barbarism.”

“We … are united against all terror organizations. They will not yield.”

Multiple opposition parties also denounced the attack, along with many foreign governments including the US, Germany, Russia, Egypt, Sweden, Greece, France, Bahrain, Qatar and Jordan.

Reaction around the world

German Chancellor Angela Merkel said in a condolence note that Germany stands on Turkey’s side in the “fight against terrorism.”

“Our thoughts are with the victims and their families … I wish the wounded a speedy recovery,” she wrote.

In the Vatican, Pope Francis led hundreds of people in prayer for the victims, saying, “sad news has reached me about the bloody attack … Let us pray for the victims, for the dead and the injured, and we ask for the gift of peace for all.”

US ambassador to Turkey John Bass condemned the “barbaric attack on innocent civilians,” adding that Washington would “continue to work closely together to defeat the common threat of terrorism.”

Turkey has been hit by a string of attacks in the past year. The country faces security threats from IS in Syria, as well as from local Kurdish fighters linked to the outlawed Kurdistan Workers’ Party (PKK).

In June, suspected IS militants attacked Istanbul’s main airport, killing 44 people. The group was also accused of carrying suicide bombings at a rally of labor activists in the capital, Ankara, last October that left more than 100 people dead.

Around a dozen people were killed this week in a string of bombings blamed on the PKK, and targeting police and soldiers. Clashes between the militants and government forces have flared after a fragile two-and-a-half year peace process collapsed last year.

Saturday’s bombing in Gaziantep comes as the country is still reeling from a failed coup attempt last month. Turkey blamed the putsch on US-based Muslim cleric Fethullah Gulen and his followers. Gulen has denied any involvement.

Earlier Sunday, Erdogan said there was “absolutely no difference” between IS, Kurdish rebels and Gulen’s movement, labeling them all terrorist groups.

He said attacks like the one on Saturday aimed to sow division between Turkey’s different groups and to “spread incitement along ethnic and religious lines.”

“Our country and our nation have again only one message to those who attack us – you will not succeed!” he said.

In Cartoon: Erdogan and the Turkish army

Erdogan and social media: use and abuse