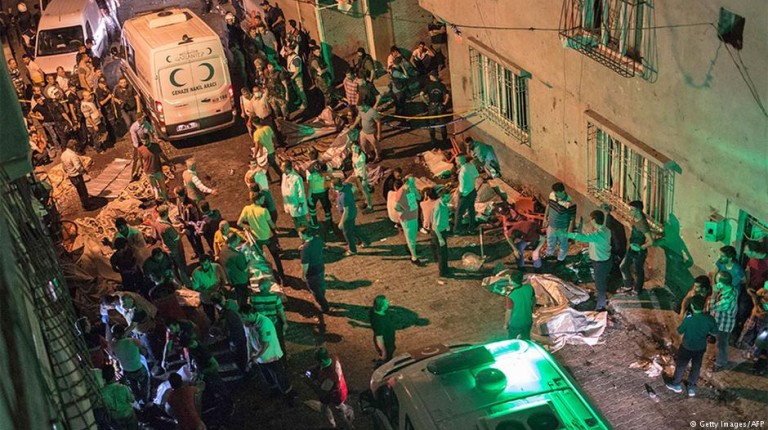 Turkish President Recep Tayyip Erdogan said on Sunday the militant “Islamic State” (IS) group was “the likely perpetrator” of a deadly blast targeting a Kurdish wedding.

“Our country and our nation have again only one message to those who attack us – you will not succeed!” he said in a statement.

The suspected suicide bomb attack took place on Saturday in a mainly Kurdish neighborhood in Gaziantep, close to the border with Syria, where IS militants hold territory.

The death toll rose to 50 on Sunday, according to the local Gaziantep governor’s office as reported by CNN Turk.

Several women and children were among the dead and 94 were wounded. The blast happened at a wedding attended by members of the pro-Kurdish Peoples’ Democratic Party (HDP).

“We condemn the traitors who organized and carried out this attack,” said a statement from Gaziantep Governor Ali Yerlikaya’s office.

A Turkish official said the explosive was detonated as a large group of people from a Kurdish wedding party took to the streets in celebration.

“The celebrations were coming to an end and there was a big explosion among people dancing,” said 25-year-old witness Veli Can. “There was blood and body parts everywhere.”

Ambulances were rushed to the scene and police cordoned off the area. Social media videos showed chaos as people used the light on their mobile phones to find victims, with many bloodied people on the ground.

Deputy Prime Minister Mehmet Simsek, interviewed on NTV television, said: “This was a barbaric attack. It appears to be a suicide attack.”

An MP from the ruling AK Party said that IS militants were believed to be behind the bombing. Other officials said it could have been carried out by Kurdish rebels.

A partial broadcast ban on reporting the attack was later imposed by the Turkish broadcasting authority.

Turkey has been rocked by a wave of attacks in the past year, either claimed by militants linked to the outlawed Kurdistan Workers’ Party (PKK) – or blamed on IS.

In June, suspected IS militants attacked Istanbul’s main airport with guns and bombs, killing 44 people. The militant group has been losing ground to US-backed Kurdish-led forces, including the key Syrian city of Minbij near the border with Turkey.

Over the past week, several attacks left 12 people dead in the largely Kurdish southeast, mostly police and soldiers, in an escalation that officials blamed on PKK militants.

The collapse of a two-and-a-half-year ceasefire between the Turkish state and the PKK in July last year has seen a return to violence in the long-running conflict. The PKK has since carried out dozens of attacks on police and military posts.