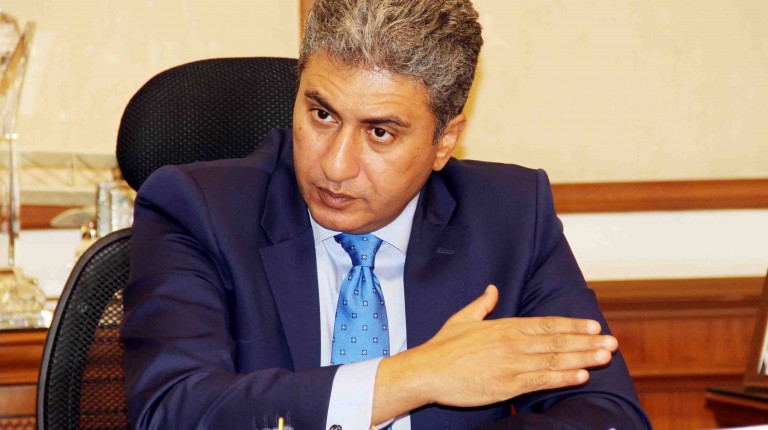 Daily News Egypt interviewed Minister of Civil Aviation Sherif Fathy to learn about the obstacles facing the air transport industry in Egypt, especially in the wake of his visit to Russia in an attempt to resume flights between both countries.

What are the results of your visit to Russia?

Our bilateral relations with Russia are more expansive than cooperation in just one sector. We deal with it comprehensively.

We are working hard to increase security at airports to resume flights with Russia.

Investigations on the fall of the Russian aeroplane are in the hands of the general prosecutors.

What were the requirements from Russia in terms of security?

The Russian side requested that wall cameras and biometric devices be installed to regulate entry and exit of airport employees.

The Ministry of Civil Aviation began processing the Russian requests.

All the devices that arrived at Egyptian airports in the first phase were not due to demands from any country, but rather a previous plan penned by the ministry and airport authorities.

We had several meetings with Russian officials and discussed a security cooperation protocol in Egyptian airports.

Is it true that a special hall will be dedicated to Russian tourists or that Russian security will be allowed to escort groups?

No, all these rumours are false. However, it is ordinary for a country to request a special hall for its nationals, but this would first require a great number of that country’s tourists coming to Egypt.

This is not a matter of Egyptian sovereignty over its territory.

In some countries, EgyptAir requires an Egyptian escort for its passengers.

A Russian delegation is scheduled to visit Egypt end of August. What are the details about the visit?

The delegation will discuss strengthening security capacities at airports with Egyptian security teams.

Egypt has received two Russian delegations in the past 40 days to inspect security at hotels and resorts in Sharm El-Sheikh and Hurghada, as well as to look into the latest developments of the investigations on the Russian airliner fall.

How was EgyptAir affected by the halt in Russian flights?

There were several incidents that took place in a short time—the fall of the Russian plane, hijacking of another, and finally the MS804 flight that crashed into the Mediterranean. Thus, EgyptAir has suffered a great deal in the past period.

If any other company had these incidents, it would have announced bankruptcy. But EgyptAir is based on a solid foundation and has leaders with expertise in both the financial and the technical aspects.

Ground services at EgyptAir suffered losses of more than EGP 300m since the fall of the Russian plane.

What are EgyptAir’s expansion plans?

The growth of EgyptAir over the past years was very moderate, in comparison with other airlines operating in the region.

EgyptAir is now seeking to pay off debts owed to the Ministry of Petroleum, including a portion from current consumption as well as accumulated debts.

We have a plan to add 70 new aircrafts to the fleet over the next five years.

This is a long-term plan that is based on flexibility in order to cope with changing circumstances.

Did the Egyptian pound depreciation against the US dollar impact EgyptAir?

The company witnessed greater losses after the devaluation of the Egyptian pound.

About 84% of the company’s costs are in dollars, which also increased financial burdens.

EgyptAir has a national duty. Hence, it operates in all conditions without aiming for profit, but to maintain the interests of the state.

The company was one of the most important communication channels with the world after the 25 January Revolution.

Did EgyptAir raise its tickets prices to cope with the increasing costs?

EgyptAir did not raise prices of domestic flights. International flight tickets were raised by 10%—which is still insufficient to offset the impact of the dollar exchange rate against the pound.

What are the details of the deal with Dubai Aerospace Enterprise for nine Boeing aircrafts?

The Chinese bank that was supposed to finance the deal backed out after EgyptAir had already ordered the new aircrafts.

The company could not give the deal away, as this would have hindered our expansion plans, so the deal will be an ordinary sell and leaseback deal.

This will save on the monthly rental of the planes, and EgyptAir will not bear any additional financial burdens, as the new planes will replace older ones that we were aiming to dispose of anyway.

The deal between EgyptAir and Boeing for nine 737-800 Boeing aircrafts was worth $864m.

How is EgyptAir cooperating with General Electric?

The cooperation with General Electric is to develop the engines workshop at EgyptAir.

We strive to make EgyptAir one of the most important General Electric engine maintenance workshops in the region.

There is a good market for maintenance, as 38% of the company’s business is maintenance of other companies’ engines.

About 60% of EgyptAir’s fleet has General Electric engines and CFM International engines or turbines.

You announced that EgyptAir intends to sell a number of dilapidated aircrafts. What is new in this regard?

EgyptAir has been facing difficulties disposing of its older aircrafts—mainly due to laws and procedures related to the sale of assets.

The period for evaluating and pricing old planes is very long.

The long period depreciates the prices, but we should not stress the committee conducting the evaluation. This law is binding for everyone.

We are, however, waiting for proposals to lease these aeroplanes as we wait for the evaluation process to be completed.

EgyptAir is currently renting out nine of its planes, which generates revenue of $350m per year.

What are the latest developments with the airport city?

The project needs the mind of real estate developers’ more than just investors.

Two plots of land have been selected as part of the project, but we are waiting for the cabinet to amend some laws to be put forward to investors.

There is a study being conducted for selling the lands instead of offering them for usufruct.

The ministry is considering some proposals for the development of the infrastructure within the project to increase revenue.

There are also three alternatives under consideration, including resorting to the help of specialised real estate companies.

Airport City is planned to lie on 10m sqm. It is divided into five investment regions. It is expected to bring investments worth more than EGP 80bn.

The Ministry of Civil Aviation announced earlier an agreement to supply Egyptian airports with Russian radars. Are there any new updates?

We have paid advances on the deal, which would cover the entire Egyptian airspace.

The Egyptian Airport Company has financed the project. It includes buying 21 radars from Russian companies.

In later stages, we will resort to government borrowing to complete the deal.

The contract was signed in February between the Egyptian Airport Company and Russian companies to import 21 radar stations in a deal worth $300m—making it the largest deal in the history of civil aviation in Egypt. It is expected to make the Egyptian airspace one of the safest in the world.

There have been proposals to increase EgyptAir’s capital. How is this going?

The idea of increasing the company’s capital was proposed by the government.

The state, however, has priorities in distributing the budget. This makes the government seek alternatives in order to finance the capital increase.

What is the ministry’s stance on Britain suspending its flights to and from Sharm El-Sheikh?

The Egyptian aviation sector does not have any new offer to present to the British side. We are currently waiting for their decision.

Egypt has fulfilled all the procedures and requirements that Britain put forward to resume flights to Sharm El-Sheikh; it is in their hands now. We do not have any plans to visit the UK—at least for now.

Did you accept any incentive programmes for foreign airlines?

We offer incentives to airlines according to the growth plans for passengers.

But we cannot build on a subsiding foundation, as it will eventually fail. We must discuss with foreign companies and offer them discounts in exchange for an added-value to the Egyptian economy.

The Ministry of Civil Aviation is ready to provide assistance to all companies, so long as they increase tourist inflow to Egypt.

There was a project to launch two satellites belonging to Navisat satellite system. What are the latest developments of this project?

The Egyptian Armed Forces is coordinating this project with Navisat satellite systems.

Navisat satellite systems operates in the Middle East and Africa. It is owned by the Egyptian government and has put forward a proposal to investors to manufacture satellites.

The satellites are planned to provide communication services for aviation traffic, airlines, and aero-navigation in the region. They are planned to meet the standards of the International Civil Aviation Organisation (ICAO). Moreover, they would offer internet services and commercial communications.

What are the plans for Smart Aviation?

Smart Aviation, owned by the Ministry of Civil Aviation, is under examination now. We are choosing between serving businessmen, or transforming it into a services company.

The transport of businessmen on the company’s private jets has declined significantly in the last few years.

You have met with the private airlines. What are the details about the ministry’s vision and the companies’ requests?

There is a work plan and an agenda for the activity of private airlines in the coming period.

We operate through carefully drawn plans to strengthen the sector in the coming years.

Egyptian private airlines should present themselves as an alternative to charter airlines that have been offering less expensive flights to Egypt.

The Ministry of Civil Aviation has flexibility to accept any requests for private aviation companies to operate new lines for flights.

The approval of the ministry on new lines should add to the Egyptian state network and hubs to transport tourists.

The ministry is committed to offering all aid and incentives for private airlines.

EgyptAir and private airlines have signed contracts for ground services for payment of fees in dollars.

What are the details of the request for private companies to pay bills for jet fuel in Egyptian pounds instead of US dollars?

The ministry will seek to negotiate with the Ministry of Petroleum during the coming period.

Turkish Airlines to resume flights to Sharm El-Sheikh in September