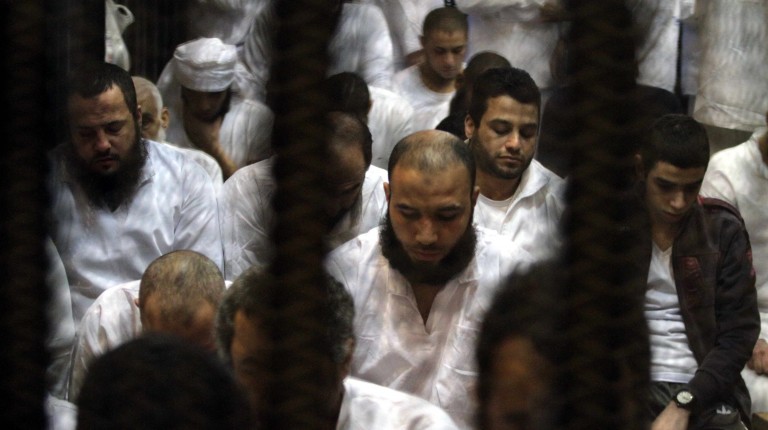 Photojournalist and student Khaled Sahloub has entered his 124th day of a hunger strike protesting mistreatment in Al-Aqrab prison, while his family has claimed that security officials are force-feeding him in order to break the strike.

The family said that security officials in Al-Aqrab prison have hooked him up to intravenous therapy (IV) while he is handcuffed to a hospital bed. The family added that he has lost around 30kg during the hunger strike.

He was transported back to Al-Aqrab prison after spending some time in the Tora prison hospital. His family said that he returned to the prison in a wheelchair.

Sahloub, a freelance journalist at Rassd News Network, was arrested in January 2014 on charges of belonging to the Helwan Brigades, a militant group that was filmed in the street carrying machine guns and vowing to attack police and army personnel. Sahloub along with dozens of other defendants are facing terrorism charges. He was arrested along with two other students, after which he claimed he was tortured in the national security apparatus headquarters.

Since his arrest, according to his family, the 24-year-old student has suffered from a stomach ulcer, low blood pressure, and pains in his bones.

Sahloub was allegedly shot by police forces in August 2013 in Ramses during clashes between pro-Morsi protesters and security forces. He was involved in the “Marriot cell” trial, which involved other journalists, both foreign and Egyptian. However, he was released in a retrial, but remained in prison as he was wanted in another case.

Al-Aqrab prison has long been one of Egypt’s most notorious prisons. It was built in 1993 under strict guardianship during the era of infamous former interior minister Habib El-Adly.

Sahloub along with other political prisoners have been reportedly protesting against ill treatment by prison officials. They cite lack of medical treatment, confiscation of personal belongings, and a ban from walking breaks as reasons for their protest.

According to the testimonies of the families of numerous detainees in the prison, inmates there receive the most brutal treatment and are subject to the most vicious types of torture, including rape. A number of deaths have been reported during incarceration at Al-Aqrab.

The Interior Ministry has repeatedly denied all previous violations and human rights reports that have reported violations in prisons or police stations.  In several press conferences, Minister of Interior Magdy Abdel Ghaffar denied the existence of systematic enforced disappearance and violations committed by police officers, claiming that they are “individual cases” and stressing the ministry holds violating officers accountable.