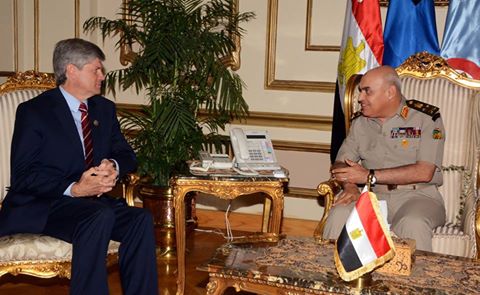 President Abdel Fattah Al-Sisi met on Tuesday with US congressman and member of the Committee on Appropriation Jeff Fortenberry as well as an accompanying delegation to Cairo. They discussed strengthening “strategic relations” between the two countries.

Al-Sisi affirmed Egypt’s welcoming of continued dialogue with the US in the meeting that was also attended by Minister of Foreign Affairs Sameh Shoukry and the US ambassador to Cairo Stephen Beecroft.

The republican politician met on Monday with Defence Minister Sedki Sobhi to discuss regional developments in the Middle East.

The two officials discussed a number of files of mutual concern regarding partnership and military cooperation between Egypt and the US, according to statement from the army.

The army’s chief of staff Mahmoud Hegazy and a number of senior officials of the armed forces also attended the meeting.

Further details of the meeting were not made available.