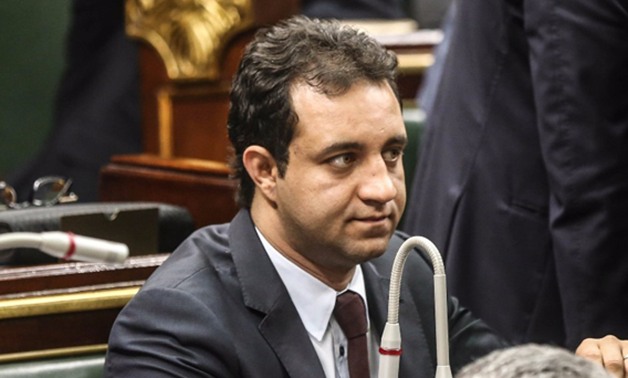 The parliamentary Legislative Committee decided to refer the discussion over the outcome of the recent verdict that disqualified member of parliament Ahmed Mortada Mansour, for the sake of his opponent Amr El-Shobaky, to parliamentary speaker Ali Abdul Aal.

“After intensive discussion sessions and disputes on whether to execute the verdict or not, the committee agreed to refer the decision to the speaker of the house Ali Abdul Aal. Legally the verdict is decisive and not to be appealed,” MP and member of the Legislative Committee Ablaa El-Hawary told Daily News Egypt Wednesday.

Regarding the legality of the discussion by the committee on a judicial verdict, El-Hawary asserted that legally the committee has the right to discuss the verdict, as it violates the 2014 Constitution.

“The constitution grants the right to void an MP’s parliamentary membership; however, declaring the former MP’s opponent as an ‘alternative’ member is not constitutional,” she stressed.

Further, she said that the court’s verdict relies on law 24/2012 which is now invalid as it was replaced by law 45/2014. This law outlines the role of the Cassation Court in deciding the legality of memberships for parliament and the Shoura Council.

In July, the Court of Cassation disqualified Mansour as an MP after a recount of the votes proved that his opponent, Amr El-Shobaky, had garnered more support.

Directly after the verdict, Mansour, who is a candidate for the Free Egyptians party, said he has the right to appeal the court decision on his dismissal, in a press conference following the verdict.

In the same context, several disputes occurred during the meetings held by the Legislative Committee to discuss the fate of the verdict, due to disagreements as to whether the verdict was based on tight articles from the constitution or not.

During the press conference held after the verdict, Mansour impugned the court decision, referring to several articles of the judicial plea law. He said: “The law gives me the right to appeal the decision and request that the final verdict be reviewed, in the case that the requester has definitive documents against the verdict that were not earlier submitted or in the case that the court decided to take an action that was not requested by the opponent.”

He claimed that his opponent did not submit any complaint to the court within 48 hours of the results being announced. He went on to say that Al-Shobaky instead submitted a complaint against former candidate Al-Sayed Gohar, who competed against Al-Shobaky before the run-off.

Mansour and Al-Shobaky saw a tense face-off in the election run-offs in October 2015, after which Mansour was announced the victor by a slim margin. This came as a surprise as preliminary reports from the polls suggested that Al-Shobaky would win.