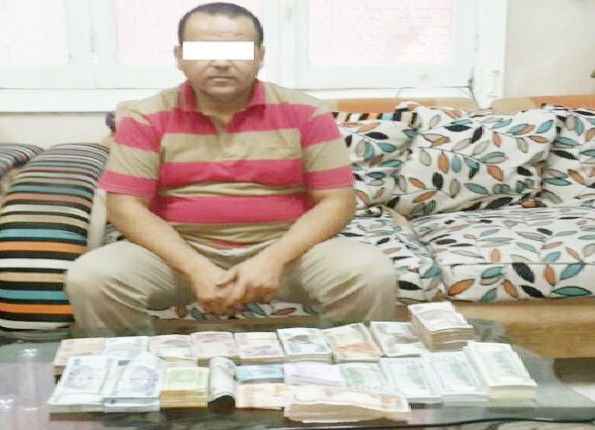 Two new defendants were enrolled in the “Hazemoon Salafist movement” case and are accused of forming a terrorist cell with the aim of creating an economic crisis. The two worked for currency exchange companies in Alexandria, and will remain in detention pending an investigation by the prosecution.

The two were ordered by the prosecution to be detained pending trial. Under the newly issued Terrorism Entities law their detention can be renewed for up to two years.

Preliminary investigations, as published by state media, pointed out that the two suspects possessed $180,000, SR 16,000, EGP 2m, as well as weapons, anti-government flyers and posters, two private cars, and a police car. The suspects were arrested in Marioutia in Giza in a private villa.

They were accused of collecting these currencies at a price higher than the official one, as well as being involved in several violent and incidents, and planning a “sabotage operation and spreading chaos”, according to the official narrative. The investigations revealed that they were ordered to commit the mentioned acts by jailed Islamist and ultraconservative leader Hazem Salah Abu Ismail.

The prosecution explained this saying that they aimed to raise the price of the US dollar in the market, “which negatively affects prices, and would cause incitement of the masses against the current regime”.

Facing several trials related to violence, Ismail was arrested in 2013 before the country started facing a foreign currency crisis. This crisis consequently raised the prices of several goods in the informal market.

To counter this, the Egyptian state has been moblising to blame the issue on individual suspects, namely defendants who appear in statements of the Ministry or Interior. The statements usually are accompanied by photos of individuals standing in front of piles of cash—both foreign and domestic currencies.

The defendants will be added in the “Hazemoon Salafist movement” case, which involves another 12 suspects. The prosecution renewed their detention for another 45 days.
Hazemoon is one of the youth movements that saw light after the 2011 revolution. Named after Abu Ismail, the movement rallied for applying Salafist morals in society, electing Abu Ismail for president, and implementing Islamic Sharia law.

Salafists in conflict over parliamentary elections