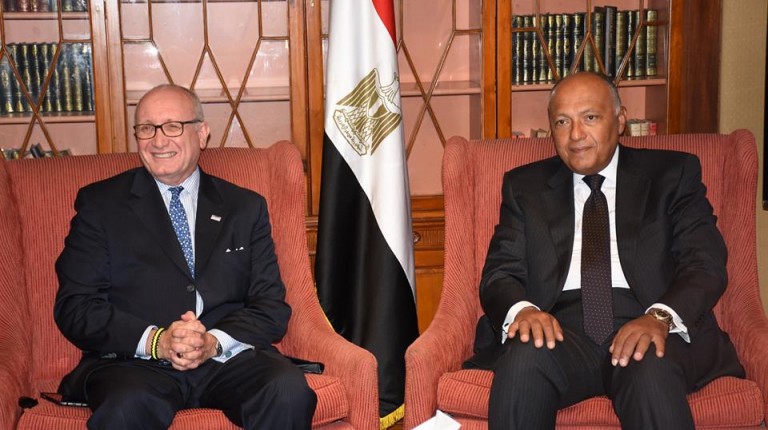 Minister of Foreign Affairs Sameh Shoukry met on Wednesday with a delegation from the Business Executives for National Security (BENS), a US-based non-profit organisation that provides the United States government with business solutions to national security problems.

“Members of the delegation asserted their non-political affiliation to any specific party in the US, and that they have a desire to boost US private sector investment in Egypt and to encourage the US government to financially assist the Egyptian economy,” Foreign Ministry spokesperson Ahmed Abou Zaid said in a press statement.

Egypt further asserted its alignment with a common US-Egypt strategy focused on fighting terrorism in the Middle East.

Experts did not identify BENS or the nature of its relationship with the Egyptian government, but Nader El-Sharkawy, foreign affairs department head and interim secretary general of the Free Egyptians Party (FEP), denied that the Egyptian government had previously signed contracts with such companies to work in national security affairs.

Atef El-Ghamry, member of the non-governmental Egyptian Council for Foreign Affairs (ECFA) was not familiar with BENS either but it was thought to be part of US thinktanks, saying that Egypt’s cooperation with US multinationals is more related to business and trade.

The BENS delegation visit follows US congressman and member of the Committee on Appropriation Jeff Fortenberry’s meeting with Egyptian officials including President Abdel Fattah Al-Sisi on Tuesday.

Experts believe that the relations between the two countries are being restored, as both have strategic interests in maintaining positive ties, after a wave of tensions that followed the popularly backed military ouster of Islamist president Mohamed Morsi in 2013.

According to El-Ghamry, throughout the different Egyptian regimes, the bases of the US relationship with Egypt differed. Under Hosni Mubarak, the US enjoyed strong ties with Egypt.

“When the Muslim Brotherhood took power, the White House’s strategy made Egypt an ally, with which it arranged its economic and political agenda according to its strategy. However, after the end of Morsi’s regime, the US imposed sanctions and pressured Egypt in an attempt to force the Brotherhood into the political sphere,” El-Ghamry said.

Currently, El-Ghamry thinks that the US recognised Egypt’s success in enhancing foreign relations, despite not expecting it to do so. “So it was important for the US to bring back balanced relations with Egypt ‘even if it does not fulfil the US strategy of domination’,” El-Ghamry stated.

Meanwhile, El-Sharkawy highlighted the deep economic and military ties between the two countries, stating that both sides have interests in maintaining such a situation, despite relations having previously weakened.

However, El-Sharkawy argued that even when the US administration took a stance against Egypt after July 2013, it was not a unified position within the US itself.

He argues that the relations with the Pentagon did not deteriorate and that the Republicans were not committed to the White House’s strategy. “I was there when Al-Sisi visited New York and met with many officials and politicians. Three years later, I believe Egypt succeeded in changing its image,” he said, supporting his claim with the Muslim Brotherhood Terrorist Designation Act of 2015 moving forward in the congress.

It seems that BENS is aligned with the approach of supporting the repair of relations with Egypt. In May 2015, BENS founding chairperson Stanley Weiss published an article in the Huffington Post, which set three recommendations for what the US should do “to protect its vital interests in Egypt and the region”.

Weiss argued that in order to commit to peace and security, the US should declare the Muslim Brotherhood a terrorist group and acknowledging the very real threat that it poses to the future of the country and the region as a whole.

Moreover, he argued that the US should support Al-Sisi’s government by providing economic aid and “encouraging American businesses to take advantage of the vast emerging Egyptian market”.

Finally, a leadership role for the US presents itself in the peace process between Palestine and Israel, which it should embrace.