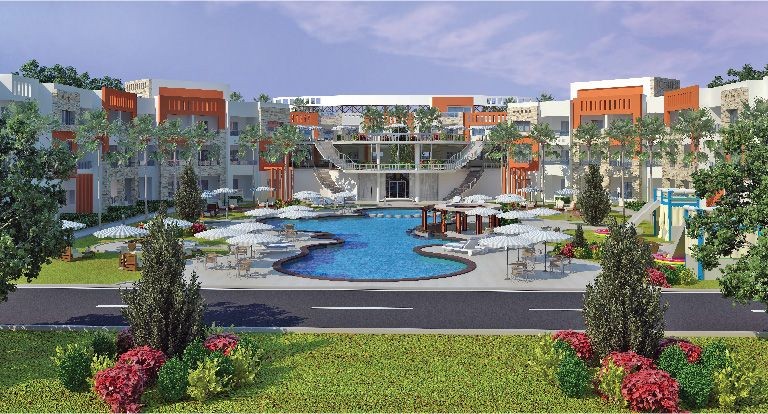 How many housing units do you aim to deliver this year?

The company plans to deliver 824 housing units this year, compared to 1,470 units last year, which inlcuded 838 units in the Blue Bay project and 632 in the Florence project. The company is working to offer clients payment facilities, such as paying 15% and establishing a four-year repayment period at zero interest.

Moreover, we aim to achieve sales amounting to EGP 1bn for this year.

What are the latest developments with the Marseilia Beach 4 project?

The average selling price per metre stands at EGP 11,000-14,000. Egyptians abroad and Arabs have bought roughly 22% of the project’s units over both phases.

What are the details of establishing a hotel in Marseille Beach 4?

The hotel will be four floors, each with an area of 4,000 sqm. It is planned to include 150 rooms and will cost EGP 70m. The company signed a memorandum of understanding with Swiss-Belhotel International, which is an international company operating in a number of countries, including Indonesia, India, Bahrain, and Kuwait, with over 40,000 rooms around the world.

What is the targeted size of sales for Hayat Alex Park project?

The company completed 50% of Hayat Alex Park project sales in Miami. It is a compound on 10 feddans, including a mall, parking spaces, administrative area, and 16 buildings holding 1,000 housing units. The area of each unit ranges from 96 sqm to 250 sqm. The average price per metre is EGP 6,500 for housing units and EGP 45,000 for stores. We also plan on building a 4-star hotel with 150 rooms at a cost of EGP 411.6m

The project comes in three phases. The first phase kicked off in 2015 and will be completed in October 2017. We will put forward a tender for both specialised work and construction work for contractors next month.

How many units do you aim to deliver this year within the Marseille Bouquet project?

We aim to deliver 70 units of the project out of 84 units. Their areas will range between 109 sqm and 189 sqm. The project is composed of four housing buildings, each with a ground floor and two floors, and will include a main swimming pool and a hotel.

What are the main factors on which the company relies to earn clients’ trust?

The company ensures delivering units in the set time. We also do not exaggerate our prices and aim for a low profit margin.

Is the company trying to compete for the lands to-be-offered by the Ministry of Housing?

Yes, the company is seeking to participate in implementing social projects in the Delta and Upper Egypt. We also aim to compete for lands that the Ministry of Housing will put forward in Cairo. Social housing accounts for 70% of the company’s 8,000 total clients.

The Ministry of Housing offers lands every now and then in collaboration with the New Urban Communities Authority. The company requires at least 60 feddans for its projects, hence we aim to acquire 60-80 feddans in 6th of October City and Fifth Settlement.

The real estate market in Egypt is one of the most promising markets, especially in light of increased demand and lack of supply.

How much is the total advertisement budget for the company’s projects in 2016?

The total financial allocations for the company’s advertising campaigns during 2016 amount to EGP 30m, compared to EGP 34m in 2015.

Which of the Gulf States achieved the company’s highest sales rate?

The United Arab Emirates and Kuwait achieved the highest sales rates for the company in the Gulf. Our company has agents in a number of Arab countries to promote and sell our projects outside Egypt, including Kuwait, Abu Dhabi, Oman, Jeddah, the UAE and Qatar. The company seeks to include Jordan to the list of agents according to our future expansion plan.

The selling season in the Gulf States lasts from October until April, while it lasts from June to mid-September in Egypt. The sales of residential projects used to extend throughout the whole year, but it became more active in the summer season only during the last three years.

How much did the company accomplish in the establishment of the Blue Bay Asia resort in Ain Sokhna?

The company has accomplished 93% of the first phase of Blue Bay-Asia in Ain Sokhna. The resort is built on an area of 52.6 acres and consists of 289 residential and hotel units. It also includes service buildings and public areas, such as the shopping mall, health club, playgrounds, a parking lot, swimming pools, and green areas. Blue Bay was built on investments worth EGP 300m. Egyptians and Arabs abroad accounted for 7% of the project sales rate.

What are the main projects that the company intends to implement during the coming period?

The company intends to implement the Miami project in Alexandria in 2017, which will be residential towers with 477 housing units, in addition to a basement, a shopping mall, and a hotel, over an area of ​​13,500 metres. The project’s implementation period is to take four years, at a total cost of EGP 822m.

One of the most notable projects that the company has worked to complete during 2015 is Marseilia Florence El Montazah in Alexandria. It is a residential, commercial, hotel project located on three acres and consists of six residential towers with 589 housing units. The average price per square metre amounts to EGP 7,000 with investments amounting to EGP 44m. Purchases by Egyptians and Arabs abroad amounted to 38% of project sales.

The company has completed the first phase of the Marseilia Alam El Roum project in 2015. It is located at the eastern entrance of Marsa Matrouh, featuring 10 residential buildings with 120 housing units. The average price is EGP 5,500 per metre, and the investment cost is estimated at EGP 40m. Implementation of the second phase of the project is expected to begin over the next year.

What are the details about the restructuring of the company’s board?

A new management board was formed after the company’s general meeting was held in March. Yasser Ali Ahmed Ragab was appointed chairperson and managing director and owns 34% of the shares of the company replacing Sami Abd Al-Rahim Fouad. Youssef Mohamad Faiz Ahmed El-Sharafi was appointed as vice chairperson of the board of directors. Arafat Mohamed Maged, representative of Omega Real Estate Services, along with Sharif Rashad Khatab, Ahmed Massad El-Taibi, and Mohamed Fathallah were also appointed as new board members.

Raouf Zaki was appointed as Chief Financial Officer instead of Islam Abdel Hamid, in addition to the appointment of Mohammed Abdel Qader, director of corporate governance and investor relations, replacing Tamer Amin.

One of the priority plans of the new board of directors is to expand the implementation of a number of residential projects, after the company focused its activities in tourism projects over the past years.

Marseilia Real Estate Investment was listed on the Nile Stock Exchange (NILEX) in 2011, with an issued capital of EGP 60m, divided into 60m shares, with a nominal value of EGP 1.

The company implemented about 15 residential and tourism projects from 2002 to 2015, these projects include about 9,000 housing units.