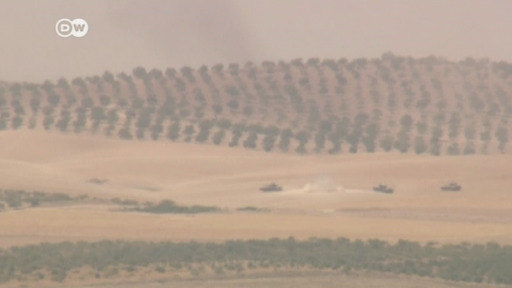 At least 10 more Turkish tanks have crossed into Syria, a day after pro-Ankara Syrian opposition fighters ousted jihadis from Jarablus. The US has said Syrian Kurds are also retreating to the east of the Euphrates.
The tanks, which crossed the border early on Thursday, were set to join a contingent of around a dozen Turkish tanks that crossed a day earlier as part of Turkey’s operation “Euphrates Shield.”

The operation marks the first time since the start of the Syrian civil war that Turkish forces, backed by the US, have crossed the Syrian border to openly intervene against “Islamic State” (IS) forces, as well as Kurdish militia.

According to the Syrian Observatory for Human Rights, Syrian rebels who seized Jarablus from IS on Wednesday have advanced 10 km (6 miles) south of the town on the Turkish-Syrian border.

Meanwhile, Kurdish-backed forces, opposed by Ankara, have gained up to 8 km of ground northwards, in an apparent attempt to pre-empt advances by the rebels.

In an interview broadcast late on Wednesday, Turkish Prime Minister Binali Yildirim said that following the expulsion of IS militia from Jarablus, Turkey’s military would continue its operation in the region. Now it’s about pushing the Kurdish YPG militia back over the Euphrates river, Yildirim said.

“Until that’s achieved, we will continue our operations,” he added.

“Our agreement with the US is that the Kurds from Manbij and the region have to withdraw to the east side of the Euphrates,” Yildirim said.

Ankara wants Syrian Kurdish fighters to move to the east shore of the Euphrates river within a week, Defense Minister Fikri Isik said in an interview with a broadcaster NTV on Thursday.

He added that the Turkish forces were “cleansing” the town of Jarablus from the “Islamic State” fighters. No Turkish casualties have been reported so far.

The US-led coalition against the “IS” tweeted that the Kurd militia had already left the area.

Manbij, which lies west of the Euphrates, was recently recaptured from IS by an alliance led by Syrian Kurdish militias.

The columnist of the Hurriyet daily, Abdulkadir Selvi, said the operation aimed to create a security zone free of “terror groups” and limit the Kurdish advance. He said 450 Turkish soldiers entered Syria on the first day of the offensive, but added that the number could rise to 15,000.

US Secretary of State John Kerry confirmed on Wednesday that Syrian Kurds were pulling back in northern Syria.

A day earlier, US Vice President Joe Biden warned Syrian Kurdish forces that they would lose US support unless they retreated east of the Euphrates.