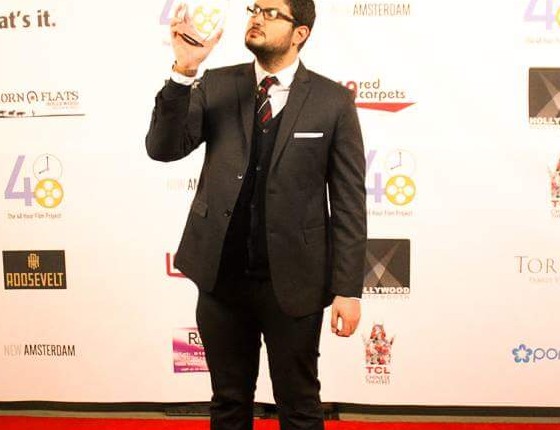 Even though he is just 27 years old, Ahmed Roshdy has become one of the few Egyptian animation artists who has managed to capture the attention of critics and audiences over the past few years. After graduating from the animation department at the faculty of fine arts, he started his professional career as an Egyptian filmmaker, illustrator, and scriptwriter. He has released three short films so far, two of which fall under the rotoscoping animation genre.

His first short movie entitled Layl (Night) symbolically tackled the idea of marriage in the Middle East. It was screened in six festivals, including the Luxor African Film Festival, and won one award and three certificates of honour. His second film was a short animation movie called Tarot that was awarded nine prizes in the 48 Hours Film Project in Cairo, and was chosen to be part of the final international contest in Hollywood, along with 550 films from around the globe. Although the movie was produced in just two days with no budget, it was also awarded a special screening in Cannes International Film Festival 2015.

In his latest animation movie, The Unknown Sweet Potato Seller, Roshdy cooperated with actor Khaled Abo El Naga and actress Tara Emad to produce a remarkable artistic piece that received funding from the British Council’s ‘Grant to Arts’ for Egypt in the field of film in 2015. The movie was inspired by shocking true events during the Egyptian revolution.

In his interview with Daily News Egypt, Roshdy talks about his artistic beginnings, the preparations of his different movies, as well as his upcoming projects.

When did you start producing movies? How did you develop and enhance your talent?

I have always been a big fan of storytelling. My dream, as a kid, was to imagine stories and turn them into reality. That was my main reason for applying to the faculty of fine arts, as I wanted to study and understand the different types and techniques of illustration and animation. Studying there opened my eyes to how imagination can be realised through drawings, but this was not enough for me and that’s how I became interested in filmmaking as a next step to express my thoughts on a higher level.

Why did you choose to tackle traditional marriage customs in your short movie Layl? And what is the main message it is trying to convey?

This film was inspired by a real-life experience that most of the crew went through in their personal lives. It shows how marriage has become a business deal between two parties and how women don’t have any real say over her father’s authority. This film is an example of many similar situations that youth go through.

I would like to give credit to the team who worked with me on this film, as it had no budget at all and it would have never seen the light of day without the cooperative teamwork of photography director Mohammed Mosaad, directing assistant Hamdy Hasaan, and editor and video compositor Islam Mohammed.

Why did you choose symbolism as a main tool to describe the struggles and suffering of your characters?

Symbolism puts an emphasis on the emotions and mental influence of the film in an indirect way.  The desert is a symbol that shows how hard life is in Egypt, the chains are the authority of the father over the woman, the bird cage at the end stands for the cynicism of how this marriage is somehow decorated as something beautiful, yet is still a cage. The woman is running away from her father’s authority just to find herself trapped in another one in a different form.

How do you choose the actors for your movies? Do you have any certain criteria?

In Layl, most of the crew were my colleagues from the faculty of fine arts. I chose Mahmoud Samy and Ganna Elmokadem because both of them were in the theatre team and they were very talented; especially Mahmoud who had been through an experience that is very close to the story of the film. I do not have certain criteria regarding the characters I choose; rather, I choose them based on how their actual, real character coincides with the character I want them to portray in the movie. That way, it won’t be a role they are playing but an honest simulation of their real lives. That’s why I chose Khaled Abo El Naga for the main role in my latest film The Unknown Sweet Potato Seller.

Do you intend to screen the movie in public venues for larger audiences?

Yes, indeed. Layl was already screened in different festivals at the Opera House and a lot of local festivals in different cities all over Egypt, but if there is a chance to screen it on any other platform, I would go for it.

Do you have any future projects, such as plans for producing a feature-length film soon?

I am preparing for an animation series right now. I do plan to produce a feature–length film, but this won’t be happening soon, as it usually needs a lot of preparation and dedication.

Imagination suffers at the hands of Apple

Meem: An animation in the face of taboos