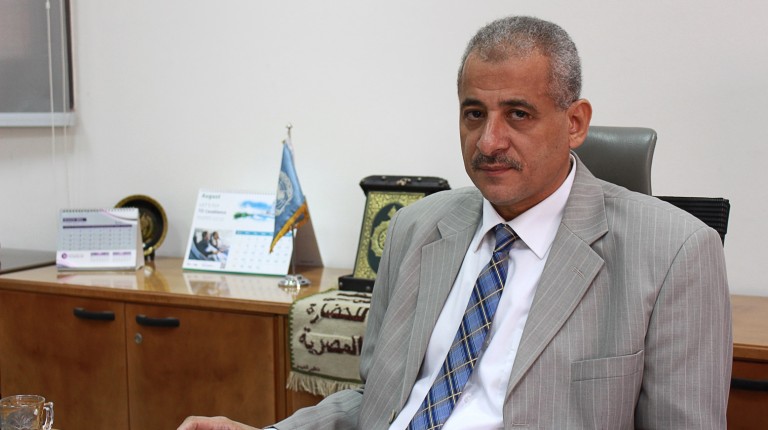 The National Museum of Egyptian Civilisation (NMEC) in El-Fustat area in Old Cairo is considered a miniature version of the Grand Egyptian Museum. The three phases of the new museum will cost about EGP 1.908bn.

NMEC is built on an area of ​​135,000 sqm, including 23,200 sqm allocated for temporary and permanent display halls, 7,400 sqm for archaeological storage, and 2,900 sqm for restoration laboratories.

Mahros Saeed, general supervisor of NMEC in El-Fustat, spoke to Daily News Egypt and revealed that the Ministry of Antiquities plans to partially open the museum by the end of October.

He added that the partial opening will include the temporary display hall, the theatre, the cinema, and the cafe, as well as 42 commercial stores available for rent.

The temporary display hall is scheduled to host various archaeological exhibitions. The hall will host an exhibition of Egyptian crafts throughout different eras during the opening ceremony.

The hall will present four Egyptian crafts, including pottery, carpentry, weaving, and jewellery, on an area of ​​1,000 sqm. It will display more than 400 artefacts.

What are the new developments in construction at the museum?

The first phase was completed in July 2011 having started in 2004. It includes the construction of all buildings, garage areas, and the electromechanical works. Hassan Allam Holding implemented the first phase at a total cost of EGP 378m.

The second phase is expected to be completed within six months, which means it will be ready during the first quarter of 2017. The technical commission of the National Defence Council took over the second phase at a cost of EGP 330m.

About 65% of the second phase has been completed. This phase includes completing the electromechanical work and the interior architectural work in the reception building as well as the construction of the glass pyramid.

The second phase began in May 2010 and was scheduled to end within 14 months. The financial and administrative obstacles that have occurred in the Ministry of Antiquities and all state agencies following the 25 January Revolution disrupted the project.

The third phase of the project will include galleries, glass display cases, multimedia work, and electromechanical work, as well as the outside display area.

The launch of the third phase is subject to obtaining the necessary funding, estimated at EGP 1.2bn—up EGP 200m from the previously estimated cost due to the rise of foreign currency rates against the Egyptian pound, especially as most of the raw materials will be imported.

Why did the construction take as long as it did?

The decline of tourism to Egypt has mainly affected the revenue of the International Campaign to Save the Monuments of Nubia, which finances the museum project.

The Nubia fund depends on the revenues of selling stamps to foreign visitors to Egypt. Each stamp costs $2 and the revenues are divided among three projects. They include the Nubia Museum, the rock temples that were moved due to the High Dam project, and the NMEC, which acquires the largest share as it is still under construction.

The Nubia Museum and the rock temples in Aswan only need maintenance, which costs $2m monthly, as well as salaries for about 800 employees.

This fund was established to save the monuments of Nubia in the 1960s and then was assigned to build the Nubia Museum in Aswan, which opened in 1997, and the NMEC in Cairo.

What is the aim of the establishment of NMEC?

The idea of ​​the establishment of this museum came after opening the Nubia Museum in Aswan.

The Ministry of Antiquities in cooperation with UNESCO started the implementation of the project in 2002, and it was funded by the International Campaign to Save the Monuments of Nubia.

The NMEC was supposed to be built on Gezira Island, but the land was allocated instead to the Cairo Opera House after the project was postponed. The Cairo governorate allocated an alternative plot of land in El-Fustat area where the museum is currently located.

The NMEC includes 11 antique stores, of which 90% have been completed. There will also be a mummy storage area which will contain 40 mummies transferred from the Egyptian Museum in Tahrir Square.

The mummy storage will be equipped with special instruments and the mummies will be placed inside special casings with nitrogen gas to preserve them. The storage area is mainly established to study and maintain the mummies.

The museum also includes eight restoration labs, of which 50% have been completed. The establishment of these labs has been halted due to the lack of funding in light of the high price of the US dollar, which is needed to import equipment and restoration devices.

It is scheduled to import the restoration devices from a European or American company according to the international specifications.

What about the collectibles of the museum and exhibition halls?

The museum is expected to contain about 50,000 artefacts, from prehistoric times until this today, oil paintings, and ornaments as well as several collections.

The museum will contain nine halls with areas ranging between 800 sqm and 1600 sqm, including. Six of these will be permanent display halls each with a unique theme—the dawn of civilisation, the Nile, writing, state and society, material culture, and religious beliefs.

The central hall will be the biggest in terms of space. It will shed light on the most important achievements of Egyptian civilisation in a linear, historic sequence that explains the periods since the beginning of prehistoric times, through the Pharaonic era, Greek era, Roman era, Coptic era, Islamic era, and the modern period.

The museum will also include a special chamber for royal mummies that will be displayed in unique ways within the museum display presentation. The presentation will include interactive screens and 3D holograms. The halls were designed in the form of a cave that includes mummies in spots that simulate the actual locations where they were discovered.

There will also be the Capital Museum, also known as the Glass Pyramid. It will offer visitors a live view of the historic landmarks of Cairo. In addition to this, it will display a panoramic show of nine famous stories in Egyptian history in addition to multimedia, sound, and light shows.

What are the museum’s activities and services?

The museum will include several areas related to cultural activities, including a meeting room with 23 seats, several chambers for simultaneous interpretation, a lecture hall that accommodates 187 people, a theatre with 486 seats, and a cinema with 332 seats.

The museum will also provide five classrooms for education initiatives, a VIP reception hall, a printing house, a library, a gift shop, and restaurants and cafeterias that overlook Ain El-Sira, in addition to 42 shops to be put up for rent in conjunction with the partial opening of the museum in October.

The NMEC includes investment elements that will be utilised to bring in enough revenues to pay workers’ wages and for regular maintenance of the museum. There will also be revenues from museum visits, including cinemas, the theatre, the seminar halls and lecture halls in addition to shops.

The museum aims to display artefacts in an advanced way, accompanied by visual and audio media that allow visitors to interact with the display in order to understand the history of its discovery and, if applicable, the way it was made.

The museum will include a variety of halls and areas that suit the time and nature of each visitor. For visitors who have little time, they can visit the central hall, which will include a comprehensive display of monuments and artefacts across various historic eras.

From where will the artefacts be transferred for display in the museum?

Artefacts will be brought from all storehouses and museums from all around Egypt in order to serve the museum display in the NMEC.

The ministry recently began transferring artefacts to the museum’s storehouses from Sakkara and Awsim, as these storehouses are considered unsafe compared to the new museum storehouses established in the NMEC.

The areas from where monuments and artefacts will be transferred also include Luxor, Mount Shisha in Aswan, middle Egypt, the Egyptian Museum in Tahrir Square, the Manial Palace Museum, the Coptic Museum, and the Greco-Roman museum.

Transferring artefacts from some museums will not affect the museum currently displaying them, as they will be borrowed for a period of six months to a year in order to fill temporary exhibitions.

The storehouses of the museum will be equipped with the latest technology in order to maintain artefacts and document them. They will also be equipped with surveillance cameras. Civil protection will also be taken into consideration, and fire extinguishing systems will be installed to suit the nature of each artefact.

The fire extinguishing systems include the water mist system and argon gas, usage of which is preferred for the safety of organic artefacts, such as papyrus and fabric. There will also be the regular carbon gas used to extinguish fires.

The museum will include organic storehouses to store artefacts made of fabric, in addition to oil paintings, wood, large and small stones, and pottery. There are also storehouses for metals, jewellery, and precious metals.