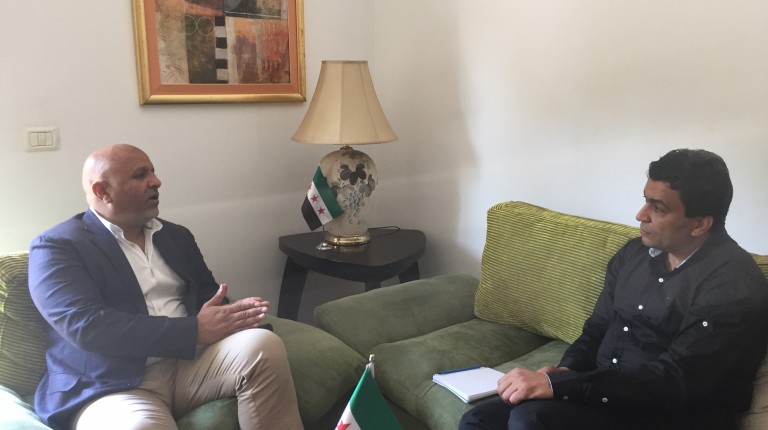 On 11 March, Ahmed Jarba, former president of the Syrian National Coalition, announced the establishment a new democratic pluralistic movement that aims to make Syria a decentralised country—this is Al-Ghad Al-Soury.

Jarba is working on forming a political movement in Syria consisting of Syrian democrats who are aware of the realities of the crisis and seek to improve the situation in Syria for the better.

The core of the movement is the democratic bloc that supported the opposition coalition, Ali El-Assy, office director and member of the movement’s secretariat told Daily News Egypt.

Following the hijacking of the coalition, its situation worsened and any possible revolution fell by the wayside. They needed a political space to discuss their ideas freely and this is how Al-Ghad Al-Soury movement was formed.

Why did you choose to launch the movement in Egypt?

Egypt was chosen as our launch platform owing to the importance of the state’s role as a powerful state that represents strategic depth for the Arab region.

I left Syria in March 2013 and stayed in Turkey for a while. I noticed that the media is hostile towards Egypt and intends to deliver misinformation about the reality of Egypt’s role in all this.

We met with Egyptians and they understand their country’s role in solving the Syrian crisis, despite being one of the countries that has little direct interest in resolving the crisis. From the opposition’s perspective, Egypt has a good role in the matter but we must be patient; the Egyptian’s role will be fruitful.

Egypt calls for Bashar Al-Assad to remain in power as a political solution, however, the opposition refuses this as he has killed so many of his own people. What is your evaluation of the Egyptian vision for the Syrian crisis?

Yes, the opposition has rejected the proposal that Al-Assad remains in power. The situation on the ground is different though. Militant groups are working in the other direction, and unfortunately the revolutionists and the Syrian people do not control anything. No sane person wants Al-Assad to remain in power, which makes the Egypt vision similar to that of the militants. The Syrians have begun dealing with this information against their will. If the political solution really is to keep him as president, the Egyptian government did not specify a time period for Al-Assad to hold his presidency.

How do Egypt’s bilateral relations with other countries impact the Syrian crisis?

The scene is rife with conflict because each party has their own interests that are different from the Syrians’ interests.

Egypt’s relations with Russia and Saudi Arabia are beneficial as the two are effective powers on Syrian territory, though each one has different goals and visions to resolve the Syrian crisis. Russia has the most important role in Syria, especially following the US’ retreat.

Egypt has strong relations with the Saudi-French party and the Russian party that supports Turkey and Iran. This will lead to a consensus on stopping the bloodshed in Syria.

As for Egypt’s unstable relations with Iran and Turkey, they are in the favour of a Syrian revolution, but Iranians are always a threat to Arab regional security.

Iranian forces can be found in a number of countries throughout the region, so they are considered the greatest threat to Arab regional security, and the ones who benefit the most from the fragmentation of the countries caught up in conflict on their lands.

This paves the way for Iranians to expand further; this is where Egypt must step in to stop the expansion. The Gulf states are aware of this, so relations with them are absolutely necessary for Egypt. Gulf states are also aware that Egypt is the safety valve, so its role could be major in the Syrian file.

Could you expand on Russia’s role in Syria?

The Russians on the other hand will slam anything they see moving on the ground—as long as it’s not regime forces. This issue has not changed anything significant in the balance of force.

What is actually happening [on the ground] is incredibly frightening. Damascus and Aleppo are being evacuated of the Sunni majority that used to live there. Meanwhile, Shi’a expansions are being allowed in the areas adjacent to Lebanon, where Hezbollah are located.

Does this mean that we could see a divided Syria?

No, this is unrealistic. Discussing it further may eventually lead to it happening.

How does the US’ role compare to how Russia is playing the game?

The Americans are managing the conflict in a way that gives the impression that they do not want to finish it. However, the Russians see the crisis as an opportunity to return to being a global force that can impact international decisions. They have been in Tartus since Hafez Al-Assad’s era. Russians are looking for the right path to their goals after they failed in the Iraqi file, and came out of the Libyan crisis without any gains.

Another important gain, which has hindered any European attack on Russia, is its occupation in Ukraine. In fact, [US secretary of state John] Kerry is almost living with the Russians.

Is there any hope for a peaceful resolution?

The Russians say that they are serious about coming to a peaceful solution and that supporters of the opposition are not serious.

Despite the different views and the different interpretations in Geneva from one opposition force to another, the main concern is stopping the Syrian bloodbath.

Jarba tried to activate the US’ role; he had even met with [US president Barack] Obama. However, Americans seem to be all talk and no action. All they have offered is talking, talking, and more talking. They never armed the revolution in the real sense.

Recently though they provided the opposition with several missiles in order to give the forces on the ground more of an equal standing. This shows that they are managing the conflict and were originally the beginning of the issue. They are even working to extend it.

Europeans, on the other hand, are doing what the US says even though the French greatly support the Syrians and their revolution. France has received many Syrians. [French president François Hollande] received Jarba more than once. Paris’s doors are open to the opposition, but France cannot do any more than that.

How are displaced Syrians being treated by their fellow Arabs?

For the Syrians in Egypt, the conditions here are much better than in Jordan or Lebanon. Here, they do not live in camps and do not feel isolated from society. Syrians here work with freedom, and there is great acceptance and integration between Syrians and Egyptians. The Egyptian government offers good facilities to Syrians despite the problems found all over the world.

There are 2 million Syrians in Turkey. Some of them could work, but the majority of them live in camps. Others try to escape to Europe where there are governments that work to turn them into productive individuals in society.

In Gulf countries, we find that Saudi Arabia is dealing with Syrians the way it deals with residents who are there for work. Since the war, we never hear about a Syrian being deported—whoever arrives there, receives the same treatment as Saudi Arabia’s residents.

Without the Saudi and Emirati support offered to refugees in Lebanon and Jordan, the situation would have been a lot worse.

Ahead of truce, Assad pledges to retake all of Syria

Syria talks falter as US, Russia meet at G-20