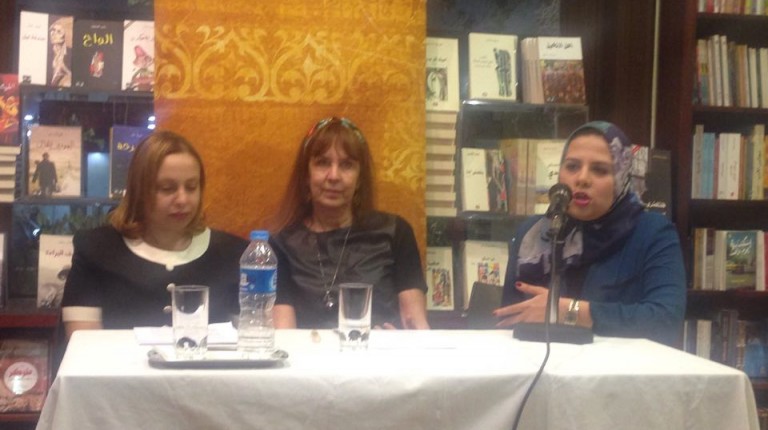 What is the difference between the sky and the ground, heaven and hell, separation and reunion? What connects a mother to her child? And will she be able to communicate with him when he has been absent for years?

Too many questions were brought up in the short film Bab El-Sama (The Sky’s Door) that was produced on the sidelines of the Luxor African Film Festival, under the supervision of American director Hailey Grima. The movie uses symbolism to examine the critical relationship of a mother, who lives in Al-Bar Al-Gharby in Luxor, and her absent son; she recalls her memories with her son by singing some of Upper Egypt heritage poems. They re-unite at the end of the movie to reveal a secret that causes a plot twist. The film received a special screening at the closing ceremony of the festival.

“I selected this topic to highlight the state of depression and grief that each mother feels when her son is gone,” said Fayza Harby, the Egyptian director of the movie and vice president of the Alexandria Short Film Festival.

“Shooting this movie was my hardest task, as I felt responsible for showing the Egyptian identity of Upper Egypt, using a narrative visual technique. Therefore, I paid great attention to using accessories, costumes, songs, and locations that may convey the customs, traditions, and old heritage of that unique geographical area,” she added.

As she believes that people’s prayers can come to God through the doors of heaven, she wanted the movie to carry this name to give a glimpse of hope for anyone who is waiting for mercy or forgiveness.

Bab El-Sama is the fifth professional filmmaking experience of the director who studied fine arts at Alexandria University. In spite of her young age, Harby participated in a number of local and international film festivals where her films captured the attention of many critics. In the Sudan Independent Film Festival, her movie Gedareya was awarded the prize of the best visual effects in a competition that included dozens of Arab and foreign filmmakers.

“I am currently working on a new documentary called ‘A woman from the gold lands’, which tells the real story of Tahra, a Nubian woman who lives in her abandoned farm in an isolated village on the borders between Egypt and Sudan,” she said.

Although her land suffers from drought due of the lack of water, she refuses to leave the ruins of her old empire that used to be a source of food for dozens of Nubians. “The movie will be completed by the end of September and is expected to be screened during the celebration of the alignment of the sun with the face of Ramses II,” she concluded.