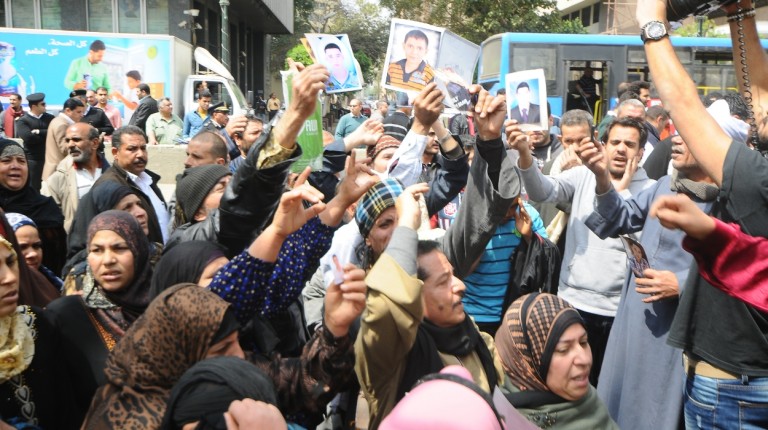 “I really don’t know how to comment or what to stay about the International Day of the Victims of Enforced Disappearances. I only can say that my husband has been forcibly disappeared for over 32 months so far, which means around three years, and I still cannot get any accurate information about him, except that he is held in an Egyptian prison,” Maha Mekawy told Daily News Egypt.

Mekawy is the wife of a well-known victim of enforced disappearance, Al-Dostor party member and school owner Ashraf Shehata, who has been missing since 13 January 2014.

In conjunction with the International Day of the Victims of Enforced Disappearances, social media users, including families, rights groups, and activists, started an online campaign Monday evening to blog about enforced disappearance cases.

Enforced disappearance is not a new phenomenon in Egypt, as it has been practised by previous regimes against opposition groups for decades. However, the phenomena receded for a while until the 25 January Revolution and 30 June Uprisings, after which it returned with more case being reported than ever before.

Currently, the practice is more publicised due to the role of social media in bringing cases to the public. Families and rights groups consider social media platforms an alternative media through which they can speak out against the phenomena and present testimonies and facts on various cases.

Despite the continued news and discussion over the practice and families’ complaints to state officials, no action has been taken by the Egyptian government to limit enforced disappearances, and Egypt has not signed any convention regarding criminalising it.

Hafez Abo Saada, member of the National Council for Human Rights (NCHR), commented to Daily News Egypt about the state’s action in this regard, saying that NCHR is attempting to sign conventions for protecting people from enforced disappearances. He also suggested that the government should amend Article 228 of unlawful detention in the Egyptian Penal Code by adding a law criminalising enforced disappearance.

On the occasion of the international day of recognition, Amnesty International published on Monday a report documenting cases of the practice in different countries around the world, including Egypt.

The report continued that since the beginning of 2015 many Egyptians have been increasingly impacted by the practice, referring to two prominent examples. One example was of 14-year-old Asser Mohamed who was forcibly disappeared for 34 days and tortured in January. The other example was that of Islam Khalil who was arrested from his home in May 2015 and disappeared for 122 days.

Amnesty accused the Egyptian public prosecution of being involved in this issue since it never held accountable the authorities committing the phenomenon against the citizen.

Lawyer Halem Henish told Daily News Egypt that there are three core elements that define enforced disappearance conditions in accordance with the International Convention for the Protection of All Persons from Enforced Disappearance (ICPPED).

Firstly, there should be an arrest or abduction. Secondly, this arrest or abduction must be conducted by an individual affiliated with the state or security agencies, including the Interior Ministry. Finally, the accused party’s should refuse to provide information regarding the missing person’s whereabouts or deny that the missing person is being held, the lawyer explained.

He added that these elements place the arrested person outside of the protection of the law, as he also can be subjected to more violations such as assaults or torture inside his detention.

Ashraf Shehata’s case is a confirmed enforced disappearance case so far as the elements above are all present. Furthermore, there is confirmation from several sources affiliated with the Interior Ministry to Shehata’s wife that he is detained.

The Interior Ministry has continuously denied the presence of the practice during a number of press conferences; however, it made an agreement with NCHR that both sides will exchange information on disappeared citizens after the council receives complaints from the families about the cases and forwards them to the ministry for information.

The Egyptian Commission for Rights and Freedom said in a report published Monday in conjunction with the International Day of the Victims of Enforced Disappearances that the number of cases from August 2015 to August 2016 is around 912, most of which took place in August 2015.

The practice also occurs in unlawful detention cases, as security forces hold arrested people for two to three days or up to a week in unknown places and deny this despite testimonies of prisoners to the prosecution or in the police station.

Despite attempts of ghosting, Egypt chased by devastating record in enforced disappearance