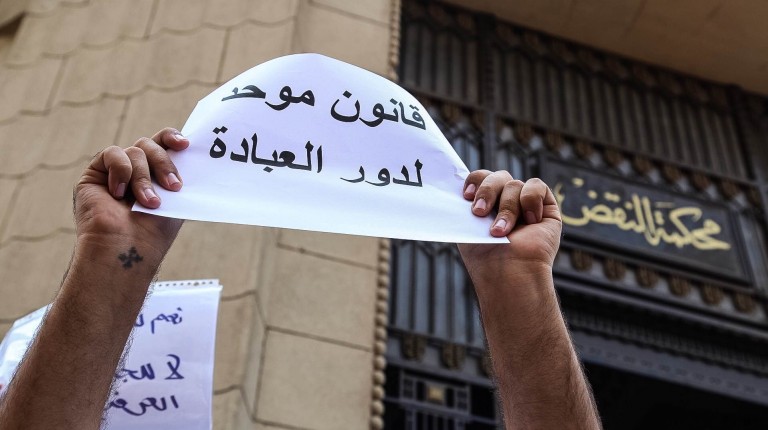 Without much discussion on the controversial law regulating the construction of churches, the House of Representatives passed it on Tuesday with a majority of the votes. Although the issuance of the law has been an important demand of the Coptic community, its legalisation comes besides several conditions that restrict the licensing of churches, rather than facilitating them as called for.

The version that the parliament approved was the draft bill prepared by the government after Egypt’s three major churches—Coptic Orthodox, Evangelical, and Catholic—said they reached an agreement during meetings with the cabinet in August.

Parliamentary members began looking at the law earlier this week, passing it within two days. As so, the parliament did not examine other proposals, even though there were others submitted by two large political parties: Al-Wafd and the Free Egyptians Party (FEP).

FEP’s ideologically dissident MP Nadia Henry saw that neither the party nor Al-Wafd held on to their projects, despite endorsements from a large number of parliament members.

But Henry criticised the lack of discussions on the law between different parliamentary committees, stating that the importance of the issue should have required debates inside and outside the parliament. “We could have benefited from meetings and an exchange of ideas in shaping a culture of national unity,” Henry told Daily News Egypt Tuesday.

Moreover, she found it wrong that the public was not involved in the process. “With all due respect to the government and churches, citizens were as equally concerned with this law. They should have felt that their demands were being realised and that sovereignty is theirs,” Henry added.

Henry admitted that the lack of time was a major concern. According to Article 235 of the Constitution, the parliament was obliged to “issue a law to regulate construction and renovation of churches” during its first legislative year, which will come to end in September. As so, parliamentary speaker Ali Abdul Aal claimed to have successfully implemented the constitutional article.

However, the second part of the article stated that the law should be issued “in a manner that guarantees the freedom to practise religious rituals for Christians”. But as much as Abdul Aal wants to spread the idea that the new law fulfils the goals of the “25-30 revolutions” or the fact that MPs loudly chanted “long live the crescent with the cross”, this new 10-article law does not reflect the constitutional article.

MP Khaled Abdel Aziz, of the 25-30 Coalition, pointed out several restrictions on the licensing of churches. For instance, an article in the law states that the construction of a church should be proportional to the “density and needs” of the Christian community in a given area.

Considering it a vague term that opens the door for biased licence rejections, Abdel Aziz said: “I suggested that the head of the Christian community [in a given area] should be the one specifying the density and needs, but the law wasn’t amended,” he told Daily News Egypt Wednesday.

Moreover, Abdel Aziz spoke of the long bureaucratic procedures that could delay licensing. “According to this new law, the governor has the authority to issue a licence for a church, within a maximum period of four months,” he said. Specific time frames were one of the demands of the Christian community. However, upon approval, the requester must then obtain authorisations from other bodies, Abdel Aziz said.

“This means more months of delay. It does not make sense since the governor is the authoriser and can be in charge of finalising those other approvals,” Abdel Aziz commented. He further mentioned that the law did not include the regulation of rented buildings, old constructions, and villages and towns where construction requirements and paper regulations are often disregarded.

“How about those new areas that are not under governors’ authority?” Abdel Aziz further asked. “Some new districts like 6th of October City fall under the authority of the New Urban Communities Authority, which should have been included in the law,” he stated.

But despite their objections, both Henry and Abdel Aziz admitted to giving in to the majority decision and to the government’s strictness.

Abdel Aziz said introducing amendments to the law of which the government and the church agreed were not allowed at the moment, but possibly in the future. He further insinuated that rejecting the law at this point could be misunderstood as non-compliance to national unity.

On the other hand, Ishaak Ibrahim, who is in charge of the Freedom of Belief unit at the Egyptian Initiative for Personal Rights (EIPR), believes that the conditions that prevented the parliament from objecting to the law now would not change in the future.

In a Wednesday statement, EIPR criticised the marginalisation of the parties mostly concerned with the law. “The cabinet and church representatives held their discussions under a veil of secrecy, without including legal experts or civil society, or even MPs,” EIPR said.

As so, the rights organisation considered the passing of the bill a “formality” to fulfil a constitutional requirement, regardless of tackling the core issue and in violation of the people’s right to know about such a critical law, not only for Christians but for all citizens.

“This new law reinforces discrimination between mosques and churches, between Muslims and Christians,” commented Ibrahim. “The law limits Christians’ rights to practise their rituals inside a church, amid a security crackdown on any Christian gathering under the pretext of them illegally turning private places into churches.”

Ibrahim also pointed out that the new law did not bring about effective solutions for issues surrounding the churches and affiliated buildings that were constructed before the bill was passed; instead, the law enforces unrealistic requirements for the licensing of existing buildings.

Moreover, the law set the same rules for new constructions and renovations, even though in the second case he believes there is no need to obtain new licences. Ibrahim was also critical of the article linking the church to the density and needs of the Christian community, wondering who would be tasked with deciding that.

“There is also a vague term in the law regarding the protection of the state’s interests,” Ibrahim stated. Security interference with churches has been one of the major concerns.

Henry said that the law requires the acquirement of “all legal approvals”, which she finds vague. “Approvals on what and from whom,” she commented.

“We knew that the law was flawed and we demanded a fair law. It is going to be hard to speak about amending it in the future because the response would be that the government and churches agreed on it. But the law makes things harder, not easier,” Ibrahim concluded.

He asserted that EIPR will continue to follow the situation of churches on the ground amid a campaign they have launched tracking churches that have been out of service under the pretext of security and preventing sectarian violence.

In July, the government initiated talks about issuing a new law regulating the construction of churches, amid weeks of escalating incidents of sectarian strife in several Upper Egypt governorates.

State restrictions on licensing churches have been a major problem that has gone on for decades. Too many approval requirements are complicated and have been handled by security in the past decades.

Political and social forces called for equality between Muslims and Christians, demanding more legal protection for religious freedoms and the right of Christians to practise their religious rituals.

Yet, the conditions imposed on church construction are not imposed on mosques.