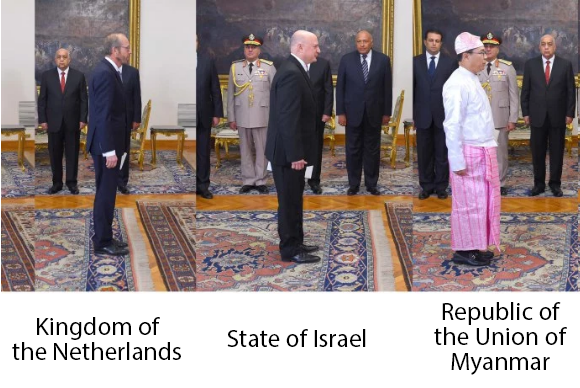 They included new Israeli ambassador David Govrin. The last Israeli ambassador Chaim Koren left Cairo after his meeting with Tawfik Okasha at the latter’s house in Daqahleya to discuss pressing issues. During the meeting, Okasha assured the ambassador that Egypt would supply Israel with water resources, if Israel supported Egypt in the conflict over the Grand Ethiopian Renaissance Dam (GERD).

The meeting caused a backlash from a number of political activists who condemned the meeting and described it as an attempt of normalisation.

Following attacks on the Israeli embassy during the 25 January Revolution, the movement and activity of the Israeli ambassador to Egypt has been significantly limited, and security has been tightened.

Al-Sisi welcomed the new ambassadors and wished them success on their missions. He asserted that they will improve bilateral relations between the countries in all fields.