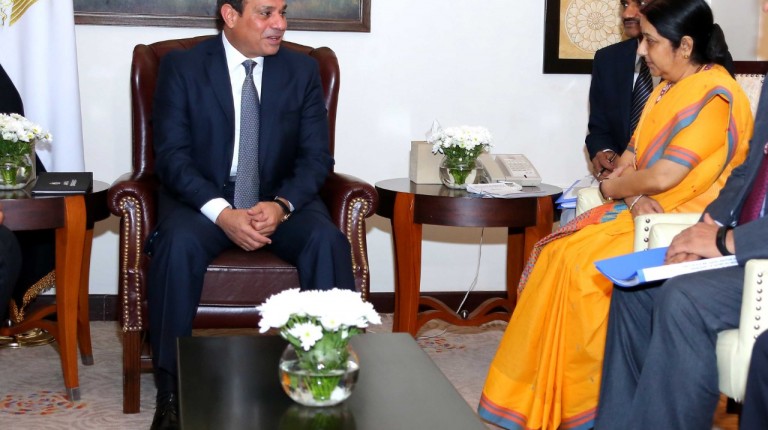 The duo also discussed the latest developments in the Middle East, and their keenness on more cooperation in different fields, as well as counter-terrorism measures.

Following the meeting, Al-Sisi held a joint press conference with the Indian prime minister. The president expressed his happiness about visiting India after he was invited by his Indian counterpart.

Al-Sisi said that the visit has proven the depth of relations and ties of cooperation between Egypt and India, and their convergence of views regarding most international and regional issues.
The president praised the strong relations between both countries, asserting that each party is keen to continue cooperation in order to find solutions for various international issues, despite the changing international circumstances.

He said that both countries were keen on strengthening their relations and cooperating given the increase of threats and common challenges, ranging from terrorism and extremism, to climate change and the need of sustainable energy sources for future generations.

‘’My discussion with the Indian prime minister revealed a consensus of views and clear intentions on enhancing our joint cooperation in a number of fields,’’ Al-Sisi said.

The two sides agreed to cooperate on a number of issues, such as working on an integrated plan to upgrade the economic and trade cooperation. Both countries want to intensify mutual investments, and promote the exchange of expertise in various areas of development.

Egypt and India also agreed on a military and security cooperation, especially in terms of counter-terrorism measures. Additionally, the countries decided to strengthen cultural and tourism ties, as well as scientific and technological cooperation, particularly in the areas of renewable energy, information and communications, and space technology.

The president concluded his speech by inviting Modi to visit Egypt in order to consolidate the ties of friendship and cooperation, thanking “the nation of India and its great leadership”.

On Thursday, Al-Sisi met with Indian external affairs minister Sushma Swaraj to discuss ways of developing bilateral relations in various fields, especially through trade cooperation and increasing the number of Indian tourists to Egypt.
The meeting also discussed the prospects of enhancing cooperation and coordination between the two countries to counter terrorism.